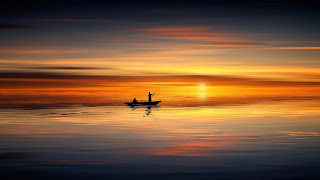 One day as Jesus was standing by the Lake of Gennesaret (The Sea of Galilee), the people were crowding around him and listening to the word of God. He saw at the water’s edge two boats, left there by the fishermen, who were washing their nets. He got into one of the boats, the one belonging to Simon, and asked him to put out a little from shore. Then he sat down and taught the people from the boat. When he had finished speaking, he said to Simon, “Put out into deep water, and let down the nets for a catch.”  Simon answered, “Master, we’ve worked hard all night and haven’t caught anything. But because you say so, I will let down the nets.”  When they had done so, they caught such a large number of fish that their nets began to break. So they signaled their partners in the other boat to come and help them, and they came and filled both boats so full that they began to sink.  When Simon Peter saw this, he fell at Jesus’ knees and said, “Go away from me, Lord; I am a sinful man!” For he and all his companions were astonished at the catch of fish they had taken, and so were James and John, the sons of Zebedee, Simon’s partners. Then Jesus said to Simon, “Don’t be afraid; from now on you will fish for people.” So they pulled their boats up on shore, left everything and followed him.

If you make the mistake of attending seminary, like I did (JK, I actually LOVED seminary), then you will inevitably learn about the so-called “crisis” of decline. In fact, I think you’ll probably get tired of hearing about it.

The church is shrinking, it seems. There is a measurable and perceptible decline in church attendance and religious affiliation. According to Gallup, “47% of Americans said they belonged to a church, synagogue or mosque, down from 50% in 2018 and 70% in 1999” (https://news.gallup.com/poll/341963/church-membership-falls-below-majority-first-time.aspx). From 1999-2020, our own denomination’s membership declined by almost 600,000 people (599,326 members, see the 2020 UCC statistical report: https://uccfiles.com/pdf/2020statisticalreport.vfw.pdf). And we can see it in our own communities. We can all think back to when there were “50 kids in the Sunday School” and 1,000 members in the church.

….are you starting to feel some anxiety? Well, yeah. So is everyone else!

Seminary classes and denominational gatherings and pastors’ conferences are being consumed by this topic. They have been for at least the last decade! Books and articles are being published with titles like Losing Church,The Decline and Fall of the Catholic Church in America, Churches and The Crisis of Decline (that one’s actually a really good and really important work on this topic), “The strange decline of US evangelicalism”, and The Rise of The Nones (That’s not nuns, as in cloistered Catholic women, but “nones” as in the religiously unaffiliated).

The anxiety seems to be everywhere....

And so what are we doing about it?

Well, it may give you some hope to know that some people, and some very smart people, are trying different things. Some are just digging their heels into all the “old” ways of doing things and complaining about how the world is turning against them.... I don’t find that approach to be all that compelling.

Some people seem to be pushing the church to be more engaged with the big problems of society. This seems to be the UCC’s approach: “We need to show the world that faith is relevant to the concerns people actually have.” And that’s not a bad thing! I fully agree with it!

Some are pushing the church to become “innovative”... to do new things to take new forms to meet people where they are. The Lily Endowment has offered millions of dollars in grant funding to help churches and organizations move in this direction. I was personally involved in one such project at my former church (First United Methodist Church of Toms River) through Princeton Seminary—a project called “The Zoe Project.”  We were granted $20,000 to listen to the longings of young adults in our community and come up with an initiative that would reach those needs.

Again, not a bad thing. The church certainly does need to think creatively about how we can serve the community and have a stronger, more positive presence in the world.

But my worry, sometimes, is that by trying to be relevant and by trying to do “new” things, we might be succumbing to a temptation (not unlike Jesus’ temptation to take power over all the nations in the wilderness in John 6).  I worry that we will forget who we really are and what we’re actually called to do.

Consider the wisdom of Jürgen Moltmann... “When religion, church, and faith are considered only from the standpoint of their expediency and usefulness for society, they are bound to vanish as soon as the purposes of society can be served by other means."

The fact is, it’s great to be relevant. It’s great to try new things and be creative. But the church, indeed faith in Christ, is not defined by how useful it is in society. Being a Christian, being the church, is not about being important.

"There are some men for whom a tree has no reality until they think of cutting it down..." -Thomas Merton

The church’s reality is deeper than usefulness. The fact is, we don’t need to look to something “new” to save the church from decline. What we need is here and has always been here.

We need to be in relationship with Christ. That’s it. In essence, what we need as the church is to pray!

There’s nothing especially relevant about prayer. And it certainly isn’t innovative. If I went to a seminary class and said, “have you tried praying,” I’d certainly come off as a pretentious jerk, and perhaps a little ignorant. But prayer is fundamentally what we do in the church. It’s who we are. So whatever we do to respond to decline, we can’t lose that. We can’t lose prayer.

So I like to look at this passage from Luke, this simple story of Jesus fishing with his friends.

The disciples have been fishing all night apparently, and they’re just coming up short. They’ve got nothing. Then Jesus comes along and borrows their boats. He’s teaching some folks about the Kingdom of God, as he tends to do, but then he stops and tells Simon, “Put out into deep water, and let down the nets for a catch.”

Simon probably wasn’t too keen on this request. I mean, Jesus knows about the Bible and stuff, but Simon knows fishing! What if I walked into your office and started telling you how to do your job?

So Simon answers, I imagine somewhat reluctantly, “Master, we’ve worked hard all night and haven’t caught anything. But because you say so, I will let down the nets.” In other words, “Jesus, we tried that already!”

Imagine going to some fishermen who are complaining about not being able to catch fish and saying, “have you tried casting your nets?”

Simon says, “Master, we’ve worked hard all night and haven’t caught anything. But because you say so, I will let down the nets.”

When they go out and do what they’d been doing all night—but this time because Jesus told them to—they catch more fish than they can handle.

"They caught such a large number of fish that their nets began to break. So they signaled their partners in the other boat to come and help them, and they came and filled both boats so full that they began to sink."

I wonder if in our anxiety to be relevant and to do “new” things, we are missing the simple call to keep doing what we’ve always done, even the stuff that doesn’t seem to be “working.” I’m not saying that if we just pray about it, people will start filling the church. I don’t even think that’s the right motivation. But what I am saying, what I think this story is saying, is that if we are faithful to Christ, even the things that seem like they’re sure to fail, might turn out to be life-giving and fulfilling.

Are you worried about the future of the church? Are you anxious about the world?