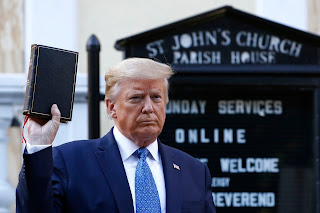 When we talk about Christianity, whose Christianity are we talking about? Is Christianity Donald Trump's, as he waves his (sorry, not his) Bible around in front of a church building he’s never attended? Or is Christianity with the demonstrators who hunger and thirst for justice, washing tear gas out their eyes?

Much has already been said about President Donald Trump’s controversial photo-op in front of St. John’s Episcopal Church, across from the White House. I don’t want to go over the details here, many other articles have covered them. But, needless to say, I was as disturbed and frustrated as anyone else by Trump’s manipulative use of religion, namely my own religion, Christianity, as a prop to bolster his divisive and destructive political position. For him to stroll across Lafayette Square and hold that Bible he’d likely never held before, containing words with which he’s likely unfamiliar, in order to implicate the church in his stance against black lives and against social change for justice (remember that all of this is happening at a peak of what may be considered the largest and most diverse civil rights movement in American history)--just that, in itself, would have been enough to frustrate most of the people who actually do read what’s in that prop he was waving. But add the fact that, in order to execute this dubious political stunt, his police used tear gas and rubber bullets to forcefully clear peaceful demonstrators including the clergy from the very church that was to be his backdrop, off of Lafayette Square, and now we’re in new territory.

Many Presidents have used Christianity as a tool for accomplishing some pretty terrible things. George W. Bush was among the worst offenders. But there was some tact and subtlety (in 2006, I would not have believed you if you’d told me that someone would be less subtle in their manipulation of the church than Bush) to these efforts. These Presidents at least pretended to be prayerful people themselves. These Presidents, in fact, spent time worshiping (even just a little) at St. John’s Episcopal Church. This is how it got its nickname, church of the Presidents. And these Presidents never once tear gassed the clergy to use the church as a prop. And to this day, Trump has never set foot inside the church of the Presidents.

By all of this, a question is raised. What is Christianity anyway? More precisely, perhaps, whose Christianity is really Christianity? This question comes up all the time, but it seems to have come up uniquely over the past 5 years or so. I remember asking how the values of George Bush and Barack Obama can be so different and yet both of them claim the same faith. I remember wondering about this in 2015 and 2016 as I watched people who I think to be Christians offer enthusiastic support for a man who I found to be so offensive to Christianity in so many ways (and I’m not just talking about his crude and offensive speech, but his substantive xenophobic policy platform as well). The question has only grown larger over these years, but in that moment and with that image, now seared into my memory, of Trump holding someone else’s bible in front of someone else’s church, I think we’ve reached a symbolically climactic moment for this question. 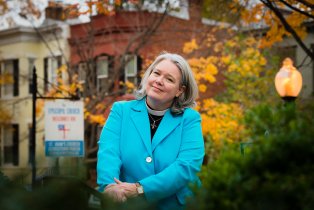 While Trump was awkwardly holding a bible for the camera, Rev. Gini Gerbasi, the Rector of St. John’s Episcopal Church, was busy washing tear gas from her hair--the very tear gas that was used to clear her and other demonstrators from the porch of the church she serves. In an interview with Phil Picardi, Rev. Gerbasi tells us that there was nothing strange about the demonstrations that day. They were exceptionally peaceful ("quiet," even), as they often are. As a member of the clergy of that church, she knew the drill. Demonstrations are often held in Lafayette Square and during those demonstrations, St. John’s porch is often used as a respite, a place where clergy are present and where water is handed out and people can find safety. She was joined that day by lots of other clergy from the area, but as the day drew on most of her colleagues had gone home. Later in the day, as Rev. Gerbasi was joining the demonstrators and providing a presence of faith in the protests, things started to change. The otherwise relatively quiet protesters began to shuffle around and she began to hear yelling followed by what sounded like gunshots. She began to see people running. Then people with swollen faces emerged from the crowd, running to her church’s porch, this time not for a water bottle but for help. The peaceful protest was transformed into a “war zone.” A little confused, she hurried to rinse tear gas out of people’s eyes and help people who had apparently been shot by rubber bullets. She realized that the gunshots she thought she’d heard were coming from the police and that tear gas had been hurled into the crowd of people who were, ironically, there to demonstrate against police violence (especially violence against black bodies). As the crowds dispersed and as she finished washing chemicals off of people’s faces, she fled her church and hurried home to wash herself off and to rinse the chemicals out of her hair. She would later discover what turned a call for justice into a war zone--a photo-op for the President.

So which Christianity is the right one? Trump’s or Gerbasi’s? You must already know where I will come out on this, but consider the question, because how we answer it is as important as the conclusion we draw.

Confession, however, is never the last word. In any church service, confession is usually something that happens early in the liturgy. We confess that we are sinners, that our history is indeed ours, and that we stand guilty, shamed, and broken before God. This is part of our worship precisely because we believe that we are, at some level, our histories. But confession is never the last word. Guilt and brokenness and shame are never final. After confession comes assurance and pardon. In our church services at First United Methodist Church of Toms River, we never say “amen” after our prayer of confession, we always wait for the assurance of pardon, which goes something like this: “Hear the good news: Christ died for us while we were yet sinners; that proves God's love toward us. In the name of Jesus Christ, you are forgiven!” THEN we say “Amen.”

Confession does not only stand against the backdrop of chronological history, it stand even more decisively before the backdrop of Christ’s history, which includes Christ’s future and the proleptic promise of resurrection. An ecclesiology from below always stands next to a Christology which is both from below and “from above.” These stained glass terms simply mean that when we talk about Christianity and its history, we are talking about Jesus Christ and his history. Bragg is right, “Christianity is no more than what it has been historically,” but this history of which we speak is Christ’s before ever it is our own. Resurrection is historical but it also determines history (see Moltmann, Theology of Hope). 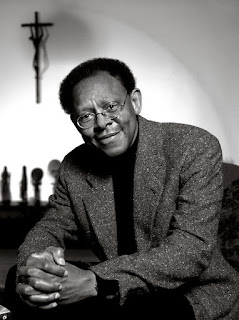 As James H. Cone put it, “There can be no Christian theology which does not have Jesus Christ as its point of departure” (A Black Theology of Liberation, 24). When it comes to discerning Christianity, we are not left to our own devices. “If God is not involved in human history, then all theology is useless, and Christianity itself is a mockery, a hollow, meaningless diversion” (26). While human action leads us down a path of confession, the path to “pardon” and to liberation is discovered through God’s action. And while human action confesses that Trump’s Christianity is Christianity, God’s action proclaims release to the captives (Luke 4:18). God's action is kerygmatic and liberating (see Cone, 20), and insofar as God’s action is liberating action, it provides the decisive backdrop for discerning what side Christianity must take. According to Cone, “Either God is for black people in their fight for liberation and against white oppressors, or he is not. He cannot be both for us and for white oppressors at the same time” (27). As Karl Barth put it, "God always places himself unconditionally and passionately on the side of the poorest and only on that side: against the proud, always in favor of the humble, against those who possess and defend their rights, and on the side of those to whom those rights are denied."

So even while we confess that Trump’s Christianity is Christianity, we are assured--by the God whose actions in history are the fundamental determination of the church, its discipleship, and thus Christianity itself--that Christianity’s history is the history of Jesus Christ. Christianity is not really in the image of waving bibles as props of political power and manipulation, but in the image of people crying out for justice and washing tear gas from their face. Christianity is necessarily and decisively on the side of the oppressed, and not the powerful, precisely because Christ is on the side of the oppressed. Indeed, Christ--who was actually and historically tortured and crucified by the powers and principalities of the age--is the one who bids us to follow him and no one else. Christianity, therefore, belongs not to both sides, or to some abstract concept of the “essence of Christianity” that stands outside of history, but to Christ who is both in history and also determines history.

Because Christianity is not ours but Christ’s, we can speak boldly and with conviction that it is Christianity’s position that Black Lives Matter, not merely because of a set of ethical or theological norms but because the history of black lives is the history of the crucified, risen, and reining Lord, Jesus. Christianity isn’t Trump’s, and it isn’t really even Gerbasi’s, it’s Christ’s.
Posted by wellis68 at 6/17/2020 11:50:00 AM