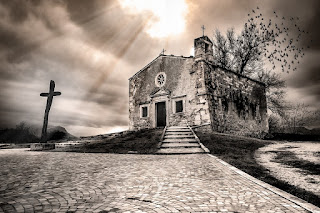 I recently finished reading a book called Militant Grace by Philip Ziegler, one of the incredible faculty at the University of Aberdeen (the institution with which I am working on my Ph.D. in practical theology). Ziegler's book is full of insight and depth and I gladly recommend it to anyone interested in theology and/or ministry, especially apocalyptic theology and eschatology.

It would certainly be worthwhile to review Ziegler's book as a whole, but I actually want to just sit with one sentence from it for now. Actually, it's a sentence that Ziegler quoted from the great Danish philosopher/theologian, Søren Kierkegaard...

"Infinite humiliation and grace, and then a striving born of gratitude - this is Christianity"

I am tempted to think that I must have come across this line before, but Ziegler quotes it line from Kierkegaard's Journals and Papers (1:434, #993; cf. 4:711. quoted in Ziegler, 154). I must admit that I might not have encountered this line prior to reading Ziegler since I haven't done a deep dive into Journals and Papers. In any case, this line may have just become one of the most important for my own theological reflection.

Human action, then, is a response to God's action, it is given to human beings as genuinely their own as a gift, as according to the pattern of the hypostatic union, wherein human and divine nature are united in Christ in a differentiated unity. Divine action and human action are brought together in grace by way of God's decisive and determining work in the incarnation.

I think Kierkegaard sums it up quite nicely, offering what I think may stand as a succinct but precise definition of discipleship. "Infinite humiliation and grace, and then a striving born of gratitude - this is Christianity."

Now "humiliation" here is to be understood with some nuance. It is not, I think, a humiliation in the sense that it makes one curl into despair and shame at the realization of their guilt before God. No. Indeed it is "humiliation and grace," I would go as far as to say that it's the humiliation of grace. A humiliation that assumes not only our guilt but even our shame in the face of a grace that it so overwhelming that it renders all else essentially irrelevant. We are humiliated insofar as everything else we are tempted to cling to in order to define ourselves - to find our worth, our identity, our salvation, our own importance, that awesome project you've built from the ground up - is utterly laid bare, proven empty, humiliated before the magnitude of God's grace. The tower we were building with our own hands, by our own inappropriate striving to reach the heavens, is brought down and we realize the truth of our nothingness and the impossibility of our own action.

Only when we have realized the impossibility before us; once it has all been brought down to nothing and our own silly striving is taken from us... only then can we awaken to the striving appropriate to us and receive the possibility that meets us in our impossibility - "...a striving born of gratitude."

God creates ex nihilo - from nothing.

Our action is gifted back to us by the same grace that took it away, but now it is not a striving born of necessity. It is a responsive striving, one that comes from joy and not anxiety, from the thankful heart and not from the personal ambition of "making something of oneself." It is the recklessly impulsive action of realizing that grace overwhelms and then longing to celebrate. Indeed, discipleship itself follows the pattern of the cross... only when the savior has been executed and buried, then raised from the dead, can we do that action that's appropriate to us... the action of gratitude, of celebration!

Human action as discipleship is nothing more than the celebration of Christ's resurrection in witnessing the calamity of his death. It is "to know Christ—yes, to know the power of his resurrection and participation in his sufferings, becoming like him in his death, and so, somehow, attaining to the resurrection from the dead" (Philippians 3:10-11).
Posted by wellis68 at 4/21/2020 09:39:00 AM