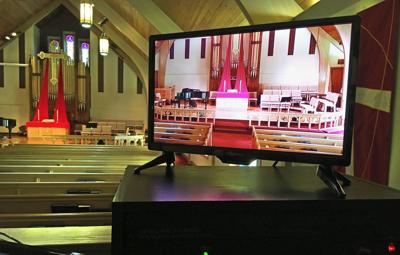 In the midst of this Covid-19 pandemic and the new vantage point it has given us from which to consider some of our longest-held and most embedded theological positions, I thought it would be worth while to share some of my own thoughts and feelings about the "virtual" Communion. Many churches are and will be practicing the sacrament through online platforms like Youtube, Zoom, and Facebook, including (starting this Sunday) my own church.

In the past, I have been fairly impatient with the idea of doing "online church" and especially with the performance of sacrament through virtual media. I believe strongly in the bodily experience of the sacraments. When one is immersed or covered in water of baptism, it isn't just an ethereal or cerebral confession that's taking place. There is a physical experience, a wet experience. One certainly celebrates the event as a confession of God's grace and the practice is certainly a way of attending to that grace, but however we describe the event, the reality always persists - the child still has to dry off, actual water will have to be wiped from actual eyes and faces.

The same goes for Communion. The bread and the cup are indeed the body and blood of Christ, given for us in self-sacrificing love, by grace alone. And the Holy Spirit transforms the fellowship that gathers at the table into a true communion, the body of Christ re-membered and brought together before God. And the meal witnesses to something beyond itself, celebrating God's decisive and saving ministry, remembering as it anticipates the day when all things shall be made new, when people from every nation will be gathered together in the sharing and receiving of grace, when God will be all-in-all.

But in all this glorious reality, the fact remains that the bread that is the body and the cup that is the blood are still "elements." The bread is bread and the cup is a cup that has juice or wine in it. And when the elements are ingested they will also be digested and they'll do what digested food does... and it will smell no sweeter.

The sacraments are bodily experiences. "We are invited with our senses to participate in the mystery of Christ's presence" (Bieler and Schottroff, The Eucharist, 23).  Community and communion are bodily experiences. This means that the promises and actions performed by God in these experiences speak over not only some transcendent ether, but they speak and affect real bodies as well. Communion is about eating and touching and rubbing elbows because the kingdom of God and all its promises are for this world of food and water and bodies.  This used to be my main argument against "virtual" Communion. Do not do virtually what has to be bodily and physical! Do not do individually what must be done communally!

However, what I never considered was the possibility that physical gathering and bodily proximity would be an impossibility. I never thought about the "virtual" option being the only option.

While we've been practicing social distancing, our church, along with many others, has been practicing "online worship," which already, in itself, anticipates "online Communion" since, after all, worship is a feast in itself. According to Jurgen Moltmann Christian worship is essentially a "feast of Christ's resurrection from the dead," and thus all Christian worship is "eucharistic" (Moltmann, Open Church, 72-73). Worshiping online already gives way to practicing Communion, the feast itself, online. But I digress...

In all of our "Online Worship" activities at First United Methodist Church of Toms River, Pastor Ed or I will always say something like, "we know this isn't the same as actually being together... but this is just one way for us to connect with God and to stay connected to each other, even while we are apart..." What we are doing with those words, with that makeshift "call to worship," is we are acknowledging the provisionality of the practice. We are confessing that our worship is not perfect, that it isn't quite there, but it's still real. It's not about the practice itself, it's about what the practice points to. It points to God and it points to our being together in this, now only "virtually" and in part, but soon actually and fully.

What this has forced me to realize is that this online worship is actually just like all worship in this one distinct quality. In terms of what we humans are doing in it, it's imperfect and it's provisional. Perhaps every worship service should begin with the confession, "this isn't quite there, but it anticipates the day when we will be!"

All human worship of God is fraught with imperfection. This is true even of our most profound and central practices, even the sacrament of Communion. For our part, the practice of Communion is never completely that which it anticipates. Even as an event in itself, it is always a witness to another event - the event of God's action and the consummation of that action in the coming of God. This is definitively so. For, as the Apostle Paul put it, "every time you eat this bread and drink this cup, you are announcing the Lord's death until he comes again" (1 Corinthians 11:26).

This element of provisionality is what I think I was missing when I was so adamantly against virtual expressions of worship and sacrament. To give it a more theological classification, this element that I was missing is the eschatological element, what Andrea Bieler and Luise Schottroff call an "eschatological imagination." They write, "A celebration of the holy meal that plumbs its eschatological depth will be an initiation into the Eucharistic life as a protest against the powers of death" (The Eucharist, 7). Communion invites us not to ascend out of our bodies and into some spiritual realm of perfection. Instead, it invites us to descend to the cross, recognizing the imperfection and even the evil of the present. "When we come together at the table, we engage in the work of lifting up the groaning of creation and the labor pains of the people of God" (The Eucharist, 6-7). We confess that though this meal celebrates Christ's real presence with us and anticipates the world's transformation under the reign of the crucified messiah, it thereby also confesses that the world is not yet there. Even as we fill our bodies and are re-membered as we remember, there are bodies that are still yet to be filled, yet to be re-membered and renewed. There are bodies that are missing... in this case, even our own.

Even as we take Communion when we are together, there are those among us (perhaps especially the Pastor) who are missing the point entirely. There are times when we fail to "discern the body." There are moments when our liturgies are quite out of sync with our realities... Our practice of Communion, for our part of it, is consistently inadequate...  and yet what makes the practice a sacrament in the first place is that the Holy Spirit sanctifies the event, transforms the practice, the elements, and the congregation itself into the body and blood of Christ re-membered.

So when churches practice online and virtual Communion in the coming weeks, these practices will be fraught with imperfection, filled with peculiarity and irony, and conditioned by provisionality. They will be, in other words, inadequate - only a shadow of that to which they are witnessing and that for which they are hoping... just like every other performace of the church. They will fail at being a true feast of the resurrection. They will fail in their togetherness, in their commuinion, even as they anticipate the our future coming together again.

And the same Holy Spirit that sanctifies every other inadequite human attempt of practicing Communion will sanctify theirs and make it a true symbol of itself, a true sacrament as the church attends to the reality of the grace of God which renders our inadequacy and inability irrelevant. Their meals will be sacraments because they will be "lifting up the groaning of creation and the labor pains of the people of God" in the midst of this pandemic. The argument could be made that Communion is more important now than it ever has been because now the bodies we inhabit are more in need of the hope of communion, of being brought back together with their community. We are groaning for togetherness... but we need to know that we are still connected.

It will be all the more important for us to gather together again for Communion when we can since our meal anticipates our being brought together, but while we can't be together, God can sanctify the practice, just as God sanctifies all sacramental experience, to be a true witness of the coming of God and the resurrection of which Christ is the firstfruits.

In closing, I would like to say that I worry about anyone who doesn't have some hesitations about "virtual Communion." If the decision is too easy, I fear that either eating or drinking or refraining from doing so will be to the demise of their witness, particularly the witness of the physicality of the gospel itself and the here-ness of God. I hold with the highest esteem those pastors and churches that are deciding not to engage in "virtual Communion." But I believe that it is Christ who makes our meal a Communion, that Christ is the host of the table, and that Christ is a generous host who doesn't mind using Zoom or Facebook Live if it honors the situation of the people of God.

Email ThisBlogThis!Share to TwitterShare to FacebookShare to Pinterest
Labels: Eucharist