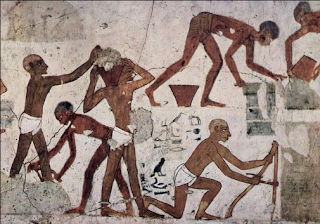 Many scholars maintain that Exodus is truly the fist book of the bible insofar as it provides a kind of logical starting point for the larger biblical narrative. It is out of the memory of being liberated that the entire story of the bible emerges. Even the Genesis account, which precedes it in the order of the canon, was written out of the memory of the Israelites’ exodus from the captivity of Egypt. Prior to liberation, the Israelites were enslaved in Egypt for generations, made to “serve with rigor” (Exodus 1:13) until they forgot the meaning of freedom. Their very existence was reduced to productivity, to building up Pharaoh’s “treasure cities” (Exodus 1:11). They were slaves, not only by vocation but by identity as well; such that when they were finally free, they needed instructions on how to live as free people (Exodus 19:5-6).

It was at Sinai that God met with Moses to offer these instructions and to give the law that would guide the people in their freedom. Grounded in the priority of God’s action--“I bore you on eagles’ wings and brought you to myself” (Exodus 19:4)--the people are given a picture of what it means to be the people of God, a theological rationale for living as “a priestly kingdom and a holy nation” (Exodus 19:6) in response to the salvation they received by the grace of God.

God tells the people to “Remember the sabbath day, and keep it holy” (Exodus 20:8). The image is painted,


Six days you shall labor and do all your work. But the seventh day is a sabbath to the Lord your God; you shall not do any work—you, your son or your daughter, your male or female slave, your livestock, or the alien resident in your towns. For in six days the Lord made heaven and earth, the sea, and all that is in them, but rested the seventh day; therefore the Lord blessed the sabbath day and consecrated it (Exodus 20:9-11).

Central (quite literally, in fact) to the image God paints of the rationale for being God’s people, for responding to and participating in God’s ministry, is a command to stop.

God tells the people that if they are to live into their identity as God’s people, they must rest and allow those around them to rest. This may seem counterintuitive. The people are finally free, should they not be getting busy being priestly and holy? It is just as counterintuitive as the seventh day of creation when, just after they had been given “dominion over the fish of the sea, and over the birds of the air, and over the cattle, and over all the wild animals of the earth, and over every creeping thing that creeps upon the earth” (Genesis 1:26), human beings’ first task on their first day on the job is to rest with God in the garden (Genesis 2:1-3), a rest they did not earn or need. It is certainly backwards to our modern sensibilities in industrial society which tells us that we should only rest when we need it and deserve it, in order to be more productive and to make better use of our time. But once we remember what this law is really about, once we remember that these are instructions for people who have been slaves for longer than they can remember, the reason for the centrality of such an image comes to light.

These are people who have been programmed, as it were, to believe that their value and their identity as human beings rested solely in their work, their productivity, their contribution to the larger scheme of Pharaoh’s progress. God is telling them that, in their freedom, they are no longer slaves. They are not merely what they do. They are human beings and not just human becomings. They are who they are, even and especially in their rest with God. They not only need to be freed from slavery, but from the rationale of slavery itself. As we discover from the rest of the story, the rationale of slavery is seductive throughout the history of Israel. Indeed this is why the Pharisees in the Newer Testament take the call to keep the sabbath holy so seriously when they're living under Roman authority (tyranny). The threat of reverting to a mechanistic identity is every looming.

Youth ministry in America, I am afraid, has a history of its own kind of rationale of slavery. As youth workers and youth ministry theologians, our history of instrumentalism, of reducing our ministerial identity to productivity and seeing our ministry merely as a means to an end, is a seductive image and we need to embrace a new image of ministry not as a means to an end, but as a theological task of encountering and resting with God. We are not slaves to the outcomes of institutions, we are free to encounter God as we encounter one another and to accept God’s coming to us, God’s taking us “on eagles’ wings” (Exodus 19:4) as an end in itself.
Posted by wellis68 at 3/04/2019 09:08:00 AM