I am a sucker for Christmas carols. And yes, even during Advent (I know some people who would shun me for conflating Christmas and Advent). I look forward to Christmas music as early as Halloween, although I have just enough self control to wait until November to start listening to it. I used to try to wait until after Thanksgiving, like everyone else, but then I figured, “who am I kidding?” I am the victory of American marketing. 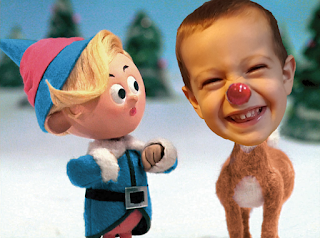 On top of my already lively enthusiasm for Christmas music, being a father adds even more value. I get a kick out of inserting my children's names into Christmas carols… you know the classics, like, “I Saw Bonnie Kissing Santa Clause” and “Henry the Red-Nosed Reindeer.” It’s hilarious (at least to me).

But I get that there something wrong with our “Christmas spirit.” I get that Christmas should do more than just give us warm feelings by the fireplace. I will freely admit the cognitive dissonance in my superficial enthusiasm for Christmas music and my conviction that we have allowed the real anticipation of Christmas in Advent to be domesticated by our nostalgic yuletide glee and “everything’s bright and merry” attitude, and in doing so, we have missed the revolutionary claims of Advent.

How different are our Christmas songs and advent hymns from the songs of anticipation sung by Mary and Zechariah in Luke 1? Listen to what Zechariah sang when his lips were opened to sing the hope of Christ’s coming to be heralded by his child, John.

“Praise be to the Lord, the God of Israel,
because he has come to his people and redeemed them.
He has raised up a horn of salvation for us
in the house of his servant David
(as he said through his holy prophets of long ago),
salvation from our enemies
and from the hand of all who hate us—
to show mercy to our ancestors
and to remember his holy covenant,
the oath he swore to our father Abraham:
to rescue us from the hand of our enemies,
and to enable us to serve him without fear
in holiness and righteousness before him all our days.
And you, my child, will be called a prophet of the Most High;
for you will go on before the Lord to prepare the way for him,
to give his people the knowledge of salvation
through the forgiveness of their sins,
because of the tender mercy of our God,
by which the rising sun will come to us from heaven
to shine on those living in darkness
and in the shadow of death,
to guide our feet into the path of peace.” (Luke 1:68-79)

This is more like a battlecry than a Christmas carol! Zechariah isn’t singing “have a holly jolly Christmas,” he’s crying out and saying “God is rescuing us from our enemies so we can fearlessly serve and worship God!” It’s anything but domesticated and it’s anything but superficial. Zechariah’s song is drenched in hope.

Why is it, though, that even after reading this song, our experience of Christmas still resonates more with Rudolph than with Zechariah? Perhaps it’s because we’re too comfortable to understand the real unbridled hope of Advent.

Let’s rewind a little and widen our lens to the larger context in which Zechariah’s song shows up. Zechariah was a good guy and a successful guy. He was a priest and an important one, at that. He was married to a good woman, Elizabeth who herself, a defendant of Aaron, was born of a priestly line. The text says that, “both of them were righteous in the sight of God, observing all the Lord’s commands and decrees blamelessly” (Luke 1:6). So, he’s living large, you might say… at least for a priest. He’s got it going for him. And on top of that, Zechariah was just chosen to burn incense in the temple. It says, “he was chosen by lot, according to the custom of the priesthood, to go into the temple of the Lord and burn incense” (Luke 1:9). This was a rare and prestigious responsibility a priest could only expect to receive about once in a lifetime. It musty have been a great honor. So Zechariah’s an important priest with important responsibilities, married to a woman from a respected priestly family. How much better could it get? How much more faithful could someone be? You could see how it might only make sense that John, the herald of the coming Messiah would be born of this family.

But just in care you were beginning to think that John’s birth was gonna be just another natural product of Zechariah’s high standing or good fortune, there’s a hitch. The story is interrupted. Zechariah’s wife, Elizabeth, is “barren.” They can’t have children. Culturally, this was a real mark of shame, even for a family with so many other honors in their life. Their barrenness would have been, for them, an immanent and constant source of anxiety and grief. With all the other things going on in their life—the blessing of high standing, the honor of offering incense in the temple—this is where the angel meets him. While he’s offering incense by himself in the temple, possibly unable to be fully present in the moment because of his grief, the angel greets him there and addresses his shame.

The angle does not meet him in all the possibility surrounding his life, but in the impossibility. The angel says to him, “do not be afraid, Zechariah, for your prayer has been heard. Your wife Elizabeth will bear you a son, and you will name him John. You will have joy and gladness, and many will rejoice at his birth, for he will be great in the sight of the Lord. ...even before his birth he will be filled with the Holy Spirit. He will turn many of the people of Israel to the Lord their God..." (Luke 1:13-16). The angel interrupts what was a story about Zechariah with a story of promise. Not only will Zechariah have a son, impossible as that is, but this son will be filled with the Holy Spirit.

This great priest, faithful as they come, is speechless (literally!) in disbelief.

Now widen the lens, one more time, to the story in which this story appears—the story of Israel. Israel is the chosen people of God, chosen to be the people from which the salvation of the world will come, chosen to be the people from whom the Messiah will come to bring peace and wholeness and the presence of God to the world. But, again, in case you thought the coming Messiah and salvation were just gonna be natural products of Israel’s faithfulness and chosen-ness, in case you thought that the Messiah was just gonna be the end of a straight line running from Abraham through David, by the time this promise if made to Zechariah, Israel is under Imperial oppression… and not for the first time. Israel’s history is hardly a story of progress. It’s really a tragic story of a people moving from one form of oppression to another. Whenever it seems like the people are making progress, when it seems they’re being faithful, they regress and revert and end up right back in the same hopelessness all over again.

Just in case you were tempted to think that the coming of the messiah and the kingdom of God were just extensions of Israel's history, the story is interrupted! It is interrupted, for Zechariah, with the announcement that his son is coming, "...to turn the hearts of parents to their children, and the disobedient to the wisdom of the righteous, to make ready a people prepared for the Lord” (1:17).

It is in this hopelessness that the promise is made and the anticipation of salvation is proclaimed.

What Zechariah is given, and what makes his song so powerful, is hope. And this hope is not optimism.

Optimism is about “potential,” the potential of the present to become the future we want. Optimism is about progress. Optimism looks at the situation and tries to find the silver-lining, to find the parts of the present that might contribute to the future. It is forced to look around or behind or beyond the hopelessness. But the gospel is not a story of progress. In fact, whenever it seems like the people are making progress, it gets reverted and things regress. The gospel looks the darkness of the present right in the eye and calls it what it is. The gospel is about hope.

Hope shows up where there is no potential.

Cornel West once said, “I cannot be an optimist but I am a prisoner of hope.” Hope is about God’s coming into the world, not the world’s potential for becoming. The gospel is about hope… hope not for progress, but for interruption… for resurrection.

You see, resurrection is not a natural development. It doesn’t come through progress. Resurrection happens when death and failure are as real as can be. Resurrection is a word spoken where silence is all there is. And it’s out of that kind of silence that Zechariah sings his Advent hymn.

"God has looked favorably on his people and redeemed them."

"Thus he has shown the mercy promised to our ancestors.”

"...To grant us that we, being rescued from the hands of our enemies, might serve him without fear, in holiness and righteousness before him all our days.”

"By the tender mercy of our God, the dawn from on high will break upon us, to give light to those who sit in darkness and in the shadow of death, to guide our feet into the way of peace.”

The Advent season is filled with words like "Joy" and "Hope." And these words are essential responses to the reality that we anticipate. But in this Advent season, let us remember that it is in weakness that God meets us. It is not that God expects us to ascend from our pain into joy, or to simply muster some hope from within ourselves. Instead, the joy and the hope of the coming of God breaks upon us and interrupts our pain and our weakness with the announcement that we will be saved. Advent is the unbridled hope of God’s coming into even the worst and most hopeless of situations. In this sense, Advent is truly revolutionary. And if we believe it in our bones, that God is coming into this messed up world, we might cry out the same way Zechariah did.
Posted by wellis68 at 11/26/2016 11:13:00 AM