The Trumped-Up Generational Division in America 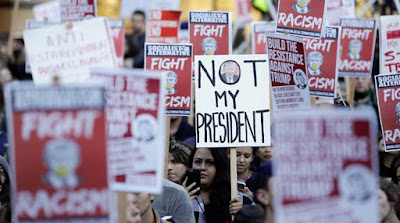 There has been a lot of focus on the divisions in our country that have been revealed through the presidential election. With Donald Trump winning really only one demographic (namely, white people, especially uneducated white males) while performing dismally among so many other minority demographics (example: a staggering 8% of black voters voted for Trump), plenty of attention has been given to the divisions in this country--between white and black, male and female, rural and urban, etc. There is one division, though, that has yet to be satisfyingly addressed: the generational division. And yet, it has been one of the most explosive divisions in the few days following the election.

In the Anti-Trump protests that have drawn thousands upon thousands to the streets of cities all across the United States, the dominant distinction is generational. I have not seen any data on this, but it appears that the protestors are diverse in all demographics--gender, race, sexual orientation, etc.--save for one. The overwhelming majority of those involved in the protests are young people, under the age of 35.

Now, given that most protests are dominated by young people, one could shrug off this observation. But the ubiquity of young people in the various protest movements we've seen in recent history-- whether it be Occupy Wall Street, Black Lives Matter, or the Dakota Pipeline protests--is exactly the reason we should be paying attention to this division. That, and the fact that 63% of people between the ages of 18 and 29 voted against the President-Elect. 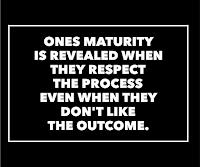 These youthful protests have produced a lot of condescension from older generations, especially but not exclusively among those who voted for Donald Trump. Memes have been created, some more mocking and dismissive than others, associating the protests with immaturity. Conservatives as well as Liberals have lofted critiques of the protests that subtly, if not explicitly, presuppose their own more "experienced" and stoic perspective to be the more wise and rational approach.

Now if any other hegemonic demographic called out against another with such presumptuous criticism (and it happens all the time), there would be an outcry, a moral charge of discrimination. When white people criticize, for example, the Black Lives Matter movement with statements like, "why don't they just obey the police," we can easily recognize the problems with which the criticism is fraught. We see that the criticism is racially charged and nuanced. But when older generations criticize younger generations, we rarely address it on the same level. 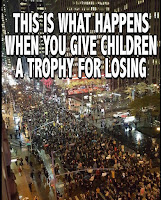 Think about it. How often is Black Lives Matter compared and criticized according to the standards of the Civil Rights Movement? How often do people compare the protest movements of contemporary America to those of the 1960's and the vietnam era? ALL THE TIME! 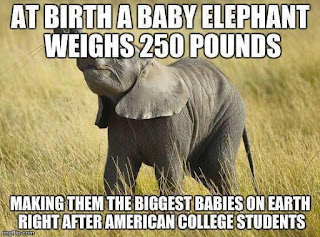 How does such a presupposition emerge? It has something to do with how we interpret human experience in general. The dominant viewpoint, at least since the beginning of the 20th century, is that human life progresses through stages from childhood to adulthood, generally speaking, on a scale of improvement... we call this "maturity." Now when we say "maturity" in this way, we're not just talking about the biological fact that human bodies get older. Through the wisdom of developmental psychology and its neurobiological analogues, we have ascribed a much more qualitative value to our notion of maturity. Maturity, as we have come to see it, is actually metaphorical--it speaks beyond the brute fact of growth and points to an ascending rationalism and a particular mode of cultural existence. According to Chris Jenks, "Such metaphoricity all speaks of an essential and magnetic relation to an unexplicated, but nevertheless, firmly established adult world. This adult world is assumed to be not only complete, recognizable and in stasis, but also, and perhaps most significantly, desirable." Jenks continues on to say that, for someone to continue with this assumption would be "to invite the charge of ethnocentrism, and deservedly so!" (Later, Jenks coins the term "gerontocentrism" to specify his term... all this is in his book, Childhood 2nd edition, pp 8-9). This adult-centered "ethnocentrism" is a real safeguard against having to risk taking young people's perspective seriously on its own right.

In treating childhood and youth as a "stage of development" we can always assume we know all about young peoples' experience because we were there once.

Adults' presumptive cultural-insider-ship has protected them from having to truly consider the disruption of these youth movements as a source of new meaning to inform new policy and new direction for the country. But we old folks (I'm 31 now, so I can say that) need to stop protecting ourselves with these assumptions. We need to start opening ourselves to the possibility that we can no more understand young peoples experience than a white person can actually understand a black person's experience. This will, perhaps ironically, allow for more empathy. Without our presuppositions, we are forced to listen charitably. Defamiliarizing ourselves from our own nostalgic presuppositions, taking young people seriously in their own right, will allow movements like this to have a real and constructive affect on our political imagination. And, if you're paying attention, you know our political imagination could use a little help right about now.
Posted by wellis68 at 11/14/2016 02:02:00 PM