God is a Teenager 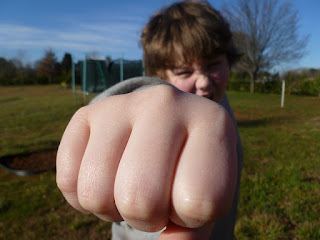 God is a teenager.

How uncomfortable is this thought for you? I imagine that, for many, it's hard to take such a claim seriously. After all, teenagers are so...    well, what comes to mind for you? Immature? Unruly? Addicted to technology? Disruptive? Filled with turmoil? Troublesome? Self absorbed? These adjectives represent what has been so assumed by our culture that it's almost achieved the status of "common sense"--teenagers are a problem. Even well-meaning empathizers will concede the notion that teenagers are in transition and have a rambunctiousness, even if an admirable one. Whether we hold them in contempt or think we should be happy to "let teenagers be teenagers," it's just part of the fabric of our culture to assume that adulthood is essentially superior and that youth (or "adolescence") would be solved by a transition into adulthood. In our thinking, maturity is a qualitative term.

So of course it's strange to think that God could be a teenager. That would suggest, given our assumptions, that God is as problematic and irrational as a teenager. God can't be so self absorbed. God can't be so tumultuous. God can't be "in transition." But why are we so much more comfortable with the thought that God is an adult human? Every Christian who confesses that Jesus is the Son of God, the second person of the trinity, confesses that God is a human--that (according to the hypostatic union) human being is taken up into the life and being of God, becoming God's. In Christian theology, it is not that Jesus is human and God is God, "...in the man Jesus, God is God" (Dietrich Bonhoeffer, Christ The Center, p. 45).

Whether or not we've come to terms with what it means (and I'm quite sure we haven't... and can't) there is something casual, in Christian theology, about the notion that God is a human being. And we're even ok with God being a baby. Every Christmas season we're joyfully confronted with images of the "Christ child," with "radiant beams" streaming from his holy face. God as the adult Jesus is fine, we may think, because he's wise and stoic. Baby Jesus is ok too because babies are sweet and innocent. But teenage Jesus!? That's harder to swallow.

All of these notions are assumptions. The fact is, babies are more than their innocence and they're not exactly easy. Adults are not necessarily any more "mature" (in the qualitative sense) or less "in transition" than teenagers. And teenagers, contrary to the conventional wisdom, don't have to be problematic--at least not any more problematic than the next human being. None of us are reduced to or determined by our transitionality. Youth is no more defined by transition into adulthood (i.e. “adolescence”) than adulthood is defined by transition into death. It is life and the depth of lived experience that gives meaning to human experience.

The claim that God is a teenager should be no more (or less) unsettling to us than the claim that God, in Jesus Christ, is human. After all, teenagers are no less human than adults.

The hypostatic union should be unsettling. It's scandalous to think that humanity, in all its brokenness and fragility, is taken up into the life and being of God. This has a way of transforming how we see humanity. The hypostatic union, after all, works in both directions. Not only is humanity taken into God, God is also taken into humanity. God assumes all human experience (infant, teenager, adult, male, female, transgender, disabled, etc). Our experience becomes God's so that God's experience and God's future becomes ours. What we discover is that humanity is not just a problem to be solved but, in Christ, it becomes a location for divine encounter.

To claim that God is a teenager is not theologically inaccurate. Indeed, it's important to do so. And not only because Jesus was, in fact, a teenager at one time, but because it allows us to see youth in a different light. It allows us to see teenagers not only as disruptive "adolescents" in transition to adulthood, but as a source of revelation.
Posted by wellis68 at 6/10/2016 09:21:00 PM