Some thoughts on creativity in parenting 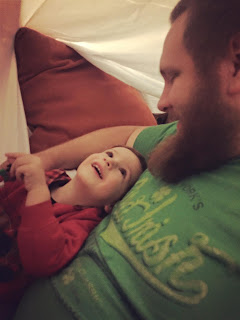 Parenting is hard, precisely because it requires such incredible amounts of humility and creativity to do it well and to do it without giving in to our retributive and authoritarian impulses. We will all--those of us with children, at least--likely agree that parenting is difficult. But how we respond to the difficulty and indeed where we place the difficulty is where we run into disagreement (and there's no shortage of disagreement among parents regarding best practices). Some would say that the difficulty of parenting merits reactions and forms of discipline that are pragmatic, though not necessarily agreeable or particularly gentle. Others (and I would include myself in this camp) would say that a major part of the difficulty of parenting is found in resisting some of those forms of discipline and communication that are our first impulse. It is creativity in parenting that turns out to be its real difficulty--finding creative alternatives to those practices that might seem, in the moment, to be most effective but actually do more harm than good in the long term.

We must come to terms with the fact that while, physiologically speaking, parenting comes natural to us, culturally speaking, parenting is quite unnatural. Relations between adults and children are relations marked by cultural differences that necessitate care and intentionality that don't just happen on accident. There are power dynamics at play which, if ignored, are easily exploited and will naturally, in the United States, be exploited by adults who do not carefully consider the complexity of their orientation to children. Expecting our "natural" impulse to be the best one without considering our cultural inclination to personal retribution and instrumentalization is a short-cut to real ethical and social-personal problems.

In America, we are conditioned toward a kind of individualism that protects that buffer between ourselves and others. In service to this individualism, retribution and punishment are privileged as inherently good. We grow thorns so that if someone transgresses our personal authority, they bleed. so if someone wrongs us, our impulse is to see them punished. This is problematic enough when applied to adult relationships. It's much more problematic in relationships between children and adults.  When a child transgresses a parent, the "natural"impulse is to manufacture a punishment in order to change behavior. The power dynamics that exist between parents and children make it almost effortless. We can spank a child, we have that power. But have you ever tried to "spank" an adult for cutting you off in traffic? It would be effective, wouldn't it? That person would probably behave differently behind the wheel in the future. But because of the way we have constructed power relations in our society, that would be simply inappropriate! It would, in fact, merit legal conviction for "assault" or worse. But when it comes to children, we basically allow it... we permit ourselves to respond to our impulses in ways we would never permit ourselves if the situation involved an adult. What is exposed in the ways we employ punishment toward children is our cultural inclination toward personal retribution. Our impulse is to act on self-preservation (the preservation of our authority) and not on the human dignity of the other, considering how they inhabit their world and conceive of their situation.

Also problematic is our cultural inclination toward instrumentalization. We are conditioned to conceive of our relationships as transactions of influence with control as its currency and effectiveness its gross domestic product. Effectiveness becomes the metric by which we judgement the merit of a given practice or form of discipline. If it works, we do it... even in relationships. We may not see the power of instrumentalization over our social imagination and cultural existence as clearly in relations among adults as we might in relations between adults and children. The trump card in disputes over what parenting techniques we should use is effectiveness. "Hey, it works!" has replaced "it's good and it's appropriate." What should drive our choices as parents (indeed, as humans) is not effectiveness but love. We should consider not only what "works" but what action actually corresponds to the dignity and the humanity of our children in their own right. We need to replace influence with participation and ask ourselves not what will most effectively influence the behavior of our children but what will allow us to participate most deeply in the humanity of our children.

Our relationships to the weakest people in our society--the ones over whom we are afforded so much control and social superiority--provide a window into our imbedded orientation to others more generally (perhaps this is why Jesus took our orientation toward "the least of these" so seriously in Matthew 25). Our impulses toward retribution and instrumentalization are not justifications for our parenting choices, they're indictments of our cultural existence.

As parents, we are called to resist, not give in to, our cultural impulses of retribution and instrumentalization. We are called to think first of the dignity of our children, not as the subjects to our authority, but as human beings who face social challenges with their own agency. To respond creatively to their "disobedience" is not to come up with a punishment, but to listen carefully to those conditions that affect their agency and their sense of security and to offer guidance and care and to face consequences with them as their parent. To creatively decide how we will respond to and relate with our children is to all but abandon metric of "effectiveness" and replace it with the metric of love.

This creativity is the true difficulty of parenting and it is also its true elegance... it is the chance for us to participate in (not just influence) the life our children and to learn from them as children what it truly means for us to be their parent.
Posted by wellis68 at 1/18/2016 11:56:00 AM

Email ThisBlogThis!Share to TwitterShare to FacebookShare to Pinterest
Labels: Parenting