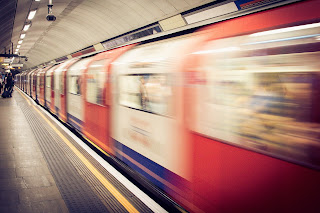 I've never been big on "New Year's resolutions"... and no! Not just because I suck at keeping them. They also bother me because they are unadulteratedly drenched in the American obsession with progress and "self-improvement" that already haunts our imagination at every turn. January (or at least its first couple of weeks) is the time when we are given permission to take our lives into our hands and become better than we were last year (even though we said pretty much the same thing the previous January... and the one before that).

Instead of resisting this impulse in the church, we tend to baptize it. Instead of resisting the American proclivity to progress and ambitious self-improvement, we simply spiritualize it--we might call it "sanctification" or something like it--and continue headlong in pursuit of "improvement" by another name. But the Christian life, sanctification in particular, is not just the "Christian" version of progress. The Christian life is about the movement of the Spirit, not the improvement of the people.

New Year's resolutions, and the proclivity to progress more generally, are deeply invested in measurement. Whether it be of the waistline, the bank account, the clock, or the scale, we rely on measurements to help us assess our status. But Henri Nouwen wrote,"In a society that overvalues progress, development, and personal achievement ...it is of great importance that we leave the world of measurements behind when we speak about the life of the Spirit." He goes on to say, "...Spiritual formation, I have come to believe, is not about steps or stages on the way to perfection. It’s about the movements from the mind to the heart through prayer in its many forms that reunite us with God, each other, and our truest selves" (Spiritual Formation p. xv-xvi).

In the United States, we effortlessly associate movement with improvement. We are almost incapable of disassociating them, in fact. But this default association inevitably leads to a kind of restlessness, an anxiety, that is rooted in judgement against the present. I think that Robert DeLong (with whom, incidentally, I went to college) captures some of this anxiety associated with the need for improvement in his song, "Just Movement."

This time of year, it is our ritual to think about taking more and more control of our lives and the things by which we measure them, even spirituality. But sanctification, the Christian life, is not about taking more and more control over our spiritual status. It is about taking less and less control--relinquishing our control over our spirituality to the Spirit--and abandoning the metric of improvement altogether. This is the irony we Americans are so prone to miss. To truly "improve" in sanctification, is to stop trying to improve and to start simply delighting in the things that delight God.

Now there's surely work to be done! The claim here is not that we should be content in doing nothing (remember there is movement even where we don't need to think about improvement). But the work that is associated with sanctification is more like play. It is not driven by "purpose" or "outcome" or "measurement." It is the work of participating in what is true of us according to God's grace and it is the impulse of having been justified in Christ. It is the work, then, of joy and passion. It is the work of love.

So this year, instead of focusing on all the room you have for improvement, focus instead on the movement of the Spirit and take delight in what delights God.
Posted by wellis68 at 1/15/2016 12:30:00 PM