Dr. Capps, You Will Be Missed 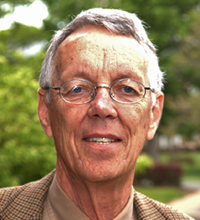 Last night the world lost one of its greatest pastoral theologians. Professor Donald Capps was killed as a result of a car accident in Princeton yesterday. Capps joined the Princeton Theological Seminary faculty in 1981 and has been prolific in his writing and influential in his thinking ever since. Capps loved to teach and he loved his students. Even after his retirement, Capps taught courses at his leisure (I was registered to take his class on Ministry and Mental Illness this Fall... it was supposed to begin in just a couple of weeks). I am grateful to have had the opportunity to get to know him a little and to study under him. He was known by all of his students as someone who invested an incredible amount of energy into responding to them and helping them get better at what they do. You could bet that Capps put at least as much energy into responding and giving feedback to his students' papers as the students put into writing them. And he was extremely constructive and charitable in doing so. If you wrote a 7 page paper, it wasn't uncommon to get 7 pages of thoughtful feedback from Dr. Capps.

I wrote a paper for his class on "Pastoral Care and The Life Cycle" which, unsurprisingly if you know me, was critical of stage theory - an approach which Capps himself found very helpful. He didn't get defensive. He was much too comfortable in his own skin to do that. And he didn't take the opportunity to school me on all the problems with my critique, though I am sure he could have. Instead, he helped me. He gave a charitable reading of what I was trying to do, sympathized with my motives, and helped me strengthen my own argument. His feedback helped me construct a major section of what became my first published article. I will forever be grateful for Dr. Capps.

A model of his own work, Dr. Capps embodied in his teaching the pastoral attentiveness, patience, and grace about which he wrote. The Princeton Seminary community is better for having had him him among them.

Dr. Capps, you will be missed.