What's Matuirty Got To Do With It? 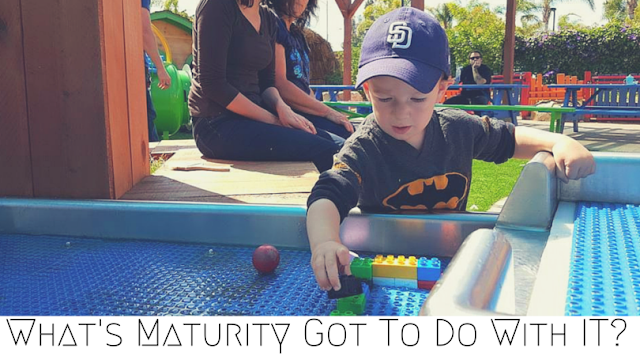 I sometimes wonder how old I'll have to be for people to stop telling me, "wait 'til you're older and you'll think differently." I've received this prophesy from people over a myriad of topics--politics, theology, education, nationalism, etc.--and I cannot recall one wherein the prophesy actually came true. I still think violence is wrong, being gay is ok, and being happy is more important than making money. And being a father, being a little older than I was (30 this year), and perhaps not a little wiser, I have certainly changed but not in the way people seemed to have expected. "Wait 'til you're older and you'll think differently" is really just code for, "you disagree with me now because you're young, and I'm smarter cause I'm older, so when you get older you'll agree with me too." And as far as I can tell, it's usually the mistaken assumption of someone who believes their nostalgic experience of being young makes them a cultural insider of youth and that the only real separation is chronological progress. It's a mistake implicit in using maturity as a qualitative term.

It's used as a way of saying that someone is not handling themselves or a particular situation appropriately. "OH, VERY MATURE!" is the sarcastic battle cry of relational superiority. According to common usage, growing up and being more mature means being courteous, being fair, caring about other people's feelings, taking courage, being independent, and taking action, among other things. The way we conceptualize it, maturity is inherently positive and preferable to immaturity. "Mature" is an adjective that's synonymous with "better." We associate maturity with a whole myriad of things we want society to have, but are any of these things actually necessarily products of maturity? Could we leave maturity out of it and still talk about being good and kind and intelligent and appropriate? What's maturity got to do with it?!

Maturity is associated with age. Being older correlates with maturity. Maturity is associated with adulthood. This is explicit when we accuse someone of "acting like a child." I can't think of a time that I've head that offered as a compliment. It's really no different that saying, "you throw like a girl." It implies that throwing like a boy is better. Saying that someone is acting like a child when they're behaving poorly implies that being an adult is better, that being a child is qualitatively inferior to being an adult. Childhood is, fundamentally, just a stop along the way to adulthood. We have nothing to learn from it, it doesn't challenge adulthood, it just needs to be overcome.

But this is simply unethical. It's unjust. It is marginalization. Some people used to think that men were superior to women. Some people used to think that white people were better than black people. Some people actually used to think that the wealthy were better than the poor. Of course I'm being tongue-in-cheek here... I'm fully aware that we have't overcome these hegemonic inequalities yet. But for the same reason that we consider these things to be unjust and immoral, it is unjust and immoral for adults to presuppose their own superiority over children. If you think I'm going too far in saying this, at least consider the analogy. This is why we should stop using "maturity" as though it has intrinsic value.

I go back and forth, though.

What if we had a definition of social maturity (and spiritual maturity) that transcended chronological maturity? What if we could imagine a maturity that is indigenous not only to adulthood but to childhood as well? We'd definitely still have to stop using maturity and "growing up" as synonyms. But perhaps we could still use the term!

Maybe it's just better that we stop assuming that maturity is inherently good. Maybe we should stop using mature and immature as value judgements and consider what it would mean to be a-mature. What if we dispensed with the value judgements and talked about the actual content of childhood, adolescence, and adulthood as distinct social practices with distinct qualities and values? What if adults actually considered what we could learn from children while we considered what they can learn from us? What if we shared the responsibility for being human and dispensed with the superiority implied in our use of the term maturity? What if we could actually imagine saying, "you're acting like a child," and meaning it as a compliment?
Posted by wellis68 at 7/28/2015 12:26:00 PM

A couple of New Testament proof-texts come to mind. First, there's Paul telling the Corinthians (1 Cor 3) that he was feeding them spiritual milk. I think that if we're to be genuine about our discipleship, we will grow in maturity: we'll understand more of God's love for us.

To contrast with this, however, is Jesus' rebuke of the grown up disciples in Mt 19:14: "Let the little children come to me, and do not hinder them, for the kingdom of heaven belongs to such as these."

Between my last church minister and my present one, we had a variety of visiting preachers. But the ones who made most of an impact on me were the older ones: they, it seemed, had spent a lifetime of praying and reflecting on their faith and they retained the most beautiful childlike trust in God.

So I'd distinguish between the "Grow up!" of "Stop having fun" or even "You'll become more (cynical, conservative, or calloused -- delete as appropriate) when you're older" -- from the exhortation of John the Evangelist to maturity: "Little children, love one another".