Is "Maturity" A Useful Category?

This has been a busy summer for me!

Just to fill you in, I've been working three jobs: a job at the mailroom at Princeton Seminary, at the Princeton Institute for Youth Ministry, and for Hopewell Presbyterian Church (I'm sorta their "Summer Pastor," doing pastoral care and preaching for the Summer while their Pastor is on sabbatical). I'm also doing some writing... not on the blog, obviously... My good friend, Dr. Erin Raffety, and I have been writing an article on Youth Ministry and Ethnography (fun stuff!!!). And on top of all that, I'm trying to study for the GRE (a test I have to take in order to apply for PhD programs, ugh.)... Oh, I am also husband and a father of a high-energy toddler...

Yeah. It's been busy.

I hope that explains why I haven't been blogging as much lately. 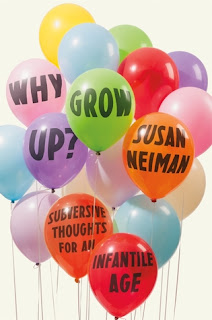 But, if you're interested in what's been on my mind lately, I've been thinking about maturity (yes... still). I have been reading a lot on Childhood Studies, which essentially tries to deal with childhood in its own right, without reducing it to a stage on the way to adulthood and thus without presupposing the rubric of maturity in conceptualizing and interpreting the content of childhood. However, I am also reading Susan Neiman's book Why Grow Up? Subversive Thoughts for an Infantile Age which, so far, has me perplexed because of it's pejorative title (apparently "infantile" is bad and "growing up" is a choice). Neiman thinks our culture is immature and privileges immaturity and she really wants people to mature... which, at first glance, just looks like a fallacy. You can't just demand that one social group (childhood or adolescence) conform to another (adulthood) as though they are separated by nothing more than chronology. But she may, in fact, be on to something. If her notion of maturity turns out to be something that can be discovered in children and adults alike, then she may actually be breaking some ground. I've only read the first few pages... but she hints that someone's maturity may have less to do with cognitive capacities or social rituals than with depth and courage. She writes, "growing up is more a matter of courage than knowledge..." (6). And while she may overemphasize agency as normative for personhood, she (ironically) describes "being a grown-up" as something that even children do: "Doing what you can to move your part of the world closer to the way that it should be, while never losing sight of the way that it is..." (8). Children, incidentally, are probably better at this than adults. And although the developmentalist narratives of 20th century psychology might implore us to believe otherwise, I think adolescents hold this balance pretty well within themselves. Of course, adults can do this too but they, perhaps no less often than children, miss the mark. Children might be more attune to how things really are than adults (they're certainly better at enjoying it), and if one is ignorant of the ways in which children act upon and shape their realities... well, they haven't been paying attention to the actual social content of childhood. So, by Neiman's definition of maturity, I might be able to learn more from my toddler than I can from many adults. This is an exciting notion of maturity! But is it maturity?

The question that's raised for me in all of this is, "what's the use of maturity?" If what we're after are certain qualities that are often associated with adulthood but are also indigenous to childhood and adolescence--qualities such as agency, courage, and morality--then why don't we just talk about those and leave maturity out of it? Why do we have to cast our cultural critiques in implicitly pejorative references to adolescence and childhood? Why bother with maturity if what we really want is for people to be good? Any child... indeed also any person who has disabilities which preclude them from the "normal" processes of maturation... can be courageous (indeed, they are almost certainly MORE courageous). Any child can act upon their reality to make it better and more harmonious (some call it playing). Any teenager can make empathic moral decisions. Why do we place these qualities on a scale of advancement, especially one that so often implies chronological advancement? Why grow-up, indeed?

I'm afraid that our notions of maturity only serve to obscure the actual content of human experience... and this is especially disconcerting to me as a practical theologian because I believe that God is part of that content. And if that's true, then what we're obscuring when we obscure people's experience is the God whom they are experiencing and thus the ways in which we can participate in God's action... we're obscuring ministry itself!