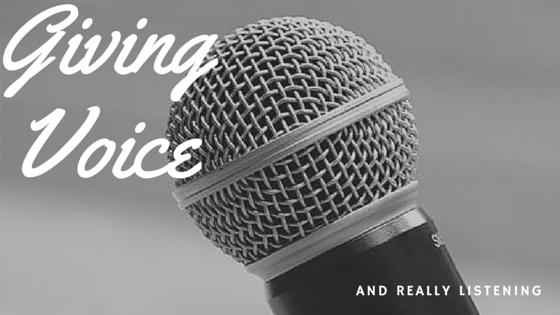 “The first duty of love is to listen.” -Paul Tillich

There's some buzz in youth ministry about "giving voice" to young people, offering space for them to speak up and be a part of the larger church (think "intergenerational" and "integration"). But giving voice is only half the battle and, in its own way, it's fraught with problems. The other indispensable half of the battle is how we actually listen to that voice. The presupposition behind "giving voice" is that "voice" is ours to give. In some ways this is true. While young people are not without agency, they live in an adult-centered "gerontocentric" society where the experience of the adult is privileged over that of the young person. Children's voices are not trusted, even if we permit them to be heard. Even Robert Wuthnow, a sociologist to whom practical theologians are deeply indebted, has suggested that "accounts of childhood can only be given by people who are no longer children" (as quoted by Bonnie Miller-McLemore). Thus children's experience, as children, is obscured. Adolescents are in no less ambiguous a situation. The adolescent experience is obscured by the same distrust but it is even more pronounced by the attribution of "transition," "immaturity," and "selfishness" that is so readily employed in description of adolescent experience. For an example of this, just read the first couple of chapters of Thomas Bergler's latest book, From Here to Maturity. You'll find that he is deeply suspicious of adolescence, using it as sort of a catch-all adjective for anything that doesn't measure up to his definition of spiritual maturity (thus introducing the even greater danger of conflating spiritual maturity with developmental maturity).

Think also of all the "teen brain" articles that get passed around the internet, studying teenagers as though they're of a different species. While neurological differences are sure to be found, it is presumptuous for us centralize these differences as though they are causal and determinative. The ulterior motive of such studies is usually to confirm our gerontocentric biases--namely, that rationalism and adulthood are objectively desirable and that young people's strangeness to us can simply be chalked up to their neurological deficiencies. (I wonder if the pharisees would have appreciated such an explanation for Jesus' impulsive and irrational activity in the Temple. Maybe he just wasn't accessing his "white matter," or else he'd have acted more like them).

As Chris Jenks has said, "given the dominance of particular models of child development... children [and adolescents] are rarely seen as competent advocates of their own experiences." Even if there have been great strides in sociology toward seeing young people as "social actors" and not just potential adults, Wuthnow's bias toward the adult experience is representative the world in which our young people live--the world they must share with us and we with them.

So what happens, then, when we "give voice" to young people? What happens when you, the Youth Pastor (use your imagination if you have to)--having just read and swallowed an NPR article about how undeveloped teenagers are or having just read a chapter by Erik Erikson about the transitory adolescent "stage of development"--ask a young person about their experience? What really happens when you put them on the "leadership team" of the youth group and ask them say what they think you should do? When you give them a voice but presume to have the normative perspective, are you actually able to hear them? When we listen to those voices, we'll be paralyzed from actually hearing what they're saying. The voice we'll hear will be what fits into the cast of our own experience (either positively or negatively). It will be a slightly underdeveloped version of our own voice.

When we "give voice" to adolescents, we need to complete the task by translating (and we're always translating) that experience in a way that honors their lived experience and listens not just for what corresponds to our experience. We cannot do that if our hermeneutic is suspicion and power. As Clifford Geertz has put it, “‘Translation’… is not a simple recasting of others’ ways of putting things in terms of our own ways of putting them (that is the kind in which things get lost), but displaying the logic of their ways of putting them in the locutions of ours; a conception which gain brings us closer to what a critic does to illumine a poem than what an astronomer does to account for a star" (Geertz, Local Knowledge, 10). When we listen, we cannot listen as though they are just not-as-well-put-together versions of ourselves. If our experience is so obscuring of their own, if such preference is given to adulthood, then we'll never hear young people as young people. But neither can we listen as though they are some different species. They are neither potential humans nor savages, they are humans being human in a different way than we are being human.  We need to find a way to listen and really listen. It is only when we can make this hermeneutical shift that neurological, biological, and psychological descriptors will be helpful to us, and it is only once we've made this shift that we can actually listen to the voices of young people once we've amplified them. As Geertz has said so eloquently,"we are surrounded (and we are surrounded) neither by Martians nor by less well got-up versions of ourselves; a proposition that holds no matter what 'we'... we start from" (16).
Posted by wellis68 at 3/21/2015 05:41:00 PM