All Lives Have Value

In the wake of the recent events in Ferguson and New York, I have been unsure what to say. At a time of racial injustice and coercive violence--a time when, as our campus minister Jan Ammon put it, "...black men and women and youth are losing their lives at the hands of those who are to protect them"--I have struggled to put words to the situation. In some ways I am shocked. I am shocked that now, in 2014, we still have to hear stories like these. I am shocked that now, in 2014, such autocratic abuses of power would go pretty much unpunished, even endorsed by the a country that fancies itself a global moral leader. In some ways I am frustrated. I am frustrated at the very real complexity of the situation--the fact that it's never as simple as it seems. Why are these stories being told and others ignored? Why has this controversy been so polarizing and divisive? (I only have to glance at my Facebook feed to see that not everyone is approaching this issue with the same assumptions or through the same lenses). I am frustrated by the humanity of oppressors and I am frustrated by the dehumanization of people on both sides of the controversy. And in some ways I am tragically and horrifyingly unsurprised. I am unsurprised at America's racism. I am unsurprised at the masking of murder with jargonistic euphemism. I am unsurprised that a country with violence in its veins would tolerate killing in the name of its own authority. I lament how unsurprising this whole situation really is.

I don't know what to say. I don't know how to say it without simply adding to the noise. And this is why I think that grief and lament are the most appropriate stances in the situation. While neutrality is intolerable in its own way, there is also no room for stone-throwing. Non-violent protest, specifically the die-in's that have been demonstrated across the country, make sense to me. They show solidarity and they cry for justice but they do not (at least not ideally) dehumanize or degrade. It is a way of standing in the middle, weeping for the world, saying "if only we knew the way for peace!" 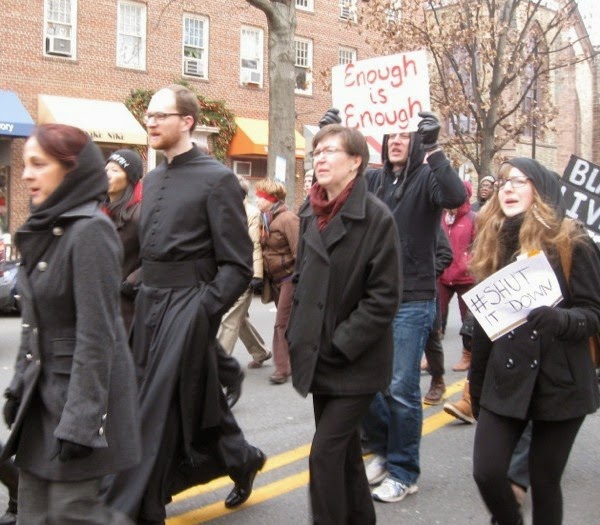 Today, about 350 Princeton Theological Seminary students and faculty members participated in a demonstration in downtown Princeton (read about it here). While I struggle for words, I think I'll borrow the words that Jacqueline Nelson, moderator of the Association of Black Seminarians at PTS, shared at the demonstration:


"Our faith compels us to declare that all lives have value... Regardless of our background, color and social status, we as a church must stand on the side of justice for all and proclaim that enough is enough. We will no longer tolerate racist and oppressive systems."