The Good News of Church Decline

I've been gathering a little data for a group with which I'm working, to see if we can't get a bird's-eye view of the state of the church in the United States. Yesterday, I put together a few charts to try to show the general decline or growth of various denominations over the years. Taking data from The Association of Religion Data Archives and other places, I put together a list of denominations in the U.S. and tried to compare their growth and decline since the 1980's (pretty much since I was born). I left out some denominations whose overall membership were so small or so large that they threw off the scale (for example, I left the ELCA off, since their numbers were so much larger but their decline followed pretty much the same pattern as the ABC and the UCC). I was also pleased to discover that some denominations are actually growing--generally very small Evangelical denominations (such as the Evangelical Free Church) as well as the Unitarian Universalist denomination (which is, ironically, similar in size and following the same pattern as most conservative Evangelical denominations). The data can be found just by browsing the ARDA website, but here's what the charts look like when you just lay them out. 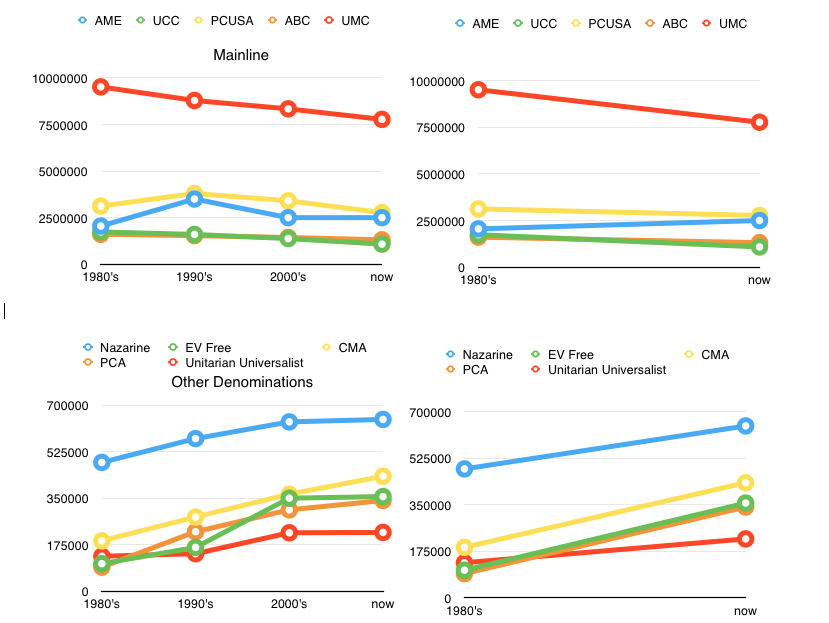 Of course, charts can be manipulated to make things look better or worse than they actually are. I did my best to keep things objective. And I don't know what your reaction is, what you might have expected, but I was actually less discouraged than I had expected to be. The mainline churches in America aren't falling into the pits at the rate that I might have expected. The UMC's decline looks the most drastic, but even it hasn't fallen below 7 million members nationwide. The data doesn't seem to support the perception that the church is going to die within the next ten years. The decline is relatively mild... indeed, some mainline denominations have even experienced growth spurts over the decades, and at least one has actually grown since 1980 (the AME denomination). Many smaller denominations are growing steadily, and I imagine that non-denominational churches are likely following similar patterns.

As a student at a Mainline (PCUSA) seminary, and as a Member In Discernment in a Mainline (UCC) denomination, I hear a lot about the decline of the church. The consensus seems to be that the church's future is bleak, if not totally hopeless. Going by the way some people talk about it, I had expected to see those lines on the graph pointing almost vertically down to the right. But the actual numbers just don't seem as hopeless as the rhetoric. I'm not saying that there's blue skies ahead. Not at all. I'm not promoting optimism. We need to take the present realities seriously and be realistic. But it's very realistic to consider the possibilities to which the future is open in the provisionality of the present. There certainly is a decline occurring in American church membership, and there's certainly a need for people to think creatively and theologically about what our response might be and what a solution might look like (assuming we agree that it's a problem that people aren't going to church... which I don't necessarily presume). But what I'm saying is that the decline need not create panic. Urgency is fine, but it's pointless to freak out just yet. It can be debated whether or not we have the appropriate funding to continue as we are, but in terms of membership, the church seems at least to be doing ok (and people are more important than funding).

So since we don't have to panic yet... since we're still going to have people in the pews this Sunday, let's stop and think about this Mainline decline phenomenon. Why is it happening? Is it really a problem? Will it stop? Why do churches on the left (the UU church, for example) and on the right (the PCA, for example) of us seem to be growing?

Let me suggest two responses to this phenomenon which may point to some answers to these questions.

1) The Church is not conventional anymore. Unfortunately, it's not because the church has awaken to the unconventionality of the gospel itself. It's not because we embody the radicality of the death and resurrection of Jesus Christ. The church should have never been conventional in the first place, had it really understood its own message. But the church is becoming less conventional because conventionality itself is becoming less conventional. Church used to be that thing you did when you were a kid and continued to do once you had your own kids. It used to be just one component of being a good American citizen. That's not the case anymore. The conventional lifestyle no longer assumes that "first comes love, then comes marriage, then comes the baby in the baby carriage." People wait longer to get married, they wait longer to have kids, and they find their identity in all different places, not just in family and church life. Church is no longer 'just something you do.' This is one reason why we might look at this Mainline decline more as an opportunity than as a threat. The church is now being stripped from its confusion with American identity. Going to church is no longer part of being a good American. This affords the church the opportunity to wholeheartedly agree with this perception, to say out loud that the gospel is not conventional and, empowered by the Holy Spirit, to own the prophetic voice of critique and speak truth American power. We can be clear that the Kingdom of God is not America and that Christianity is not about what America is about. By being disconnected from convention, we can be the radical witnessing community of the reign of God which we are gathered and sent out to be. This divorce of the church from the American perception of conventionality may itself be a present (but provisional, of course) anticipation of God's reign in the world.

2) Our society is becoming more inclusive of our LGBTQ sisters and brothers. This is a less directly
connected observation, so it requires a little more explanation. Why should the acceptance of LGBTQ people contribute to the decline of Mainline denominations (especially those that seem now to be coming around to the same position)? The connection between the discrimination that LGBTQ people have experienced in American history and the traditional position of the church on this is undeniable. Whether we like it or not, the traditional American presumption against the inclusion of these people is predominantly a religious one. When the church was pretty much part of what it meant to be a good American, Americans took their cues regarding sexuality from the church, and the church was still pretty sure that the Bible was against homosexuality. Now that we've moved away from the church as conventional, people no longer feel they need to take their cues from the church on this issue, so they're becoming more inclusive (how sad it is that leaving the church has made America more accepting!). But why haven't inclusive denominations (such as the UCC and the PCUSA) grown along with this change? Perhaps the answer is this: too little, too late. America found that is could be inclusive without the church, so the churches that identify themselves by their inclusiveness aren't really giving people a reason to show up on Sunday, even if they are giving people a reason to like them. They still aren't distinct from the conventionality that so many Americans are abandoning. Evangelical and Unitarian churches, however, are growing precisely because of their distinctiveness. Unitarian Universalists are distinct in that they represent a spirituality that is intuitively and essentially inclusive. Inclusivity of LGBTQ people (not to mention theological and spiritual diversity) in Mainline Christianity, as American Mainline church history seems to suggest, is somewhat counter-intuitive and external to the dogmatism that seems to sit closer to the center of its essential nature. Evangelicals (the conservative kind we're talking about) are distinct in that they seem to be "holding their ground" in opposing the inclusion of LGBTQ people and maintaining the simplicity of a biblicist dogmatism in which you can "know" the truth. I imagine that these conservative Evangelical denominations are picking up many of the crumbs from the Mainline table, enlisting many of those who aren't yet ready to embrace the complexity of diversity toward which culture and many Mainline churches are moving. Conservative Evangelicalism will be appealing to people who aren't moving along with the society on this issue. This is not to suggest that this is the only reason that Evangelical churches are growing, it's not as though they're just filling up with everyone who's too homophobic to accept a gay pastor, in fact, I imagine that there are a lot of more positive reasons, but it does demonstrate one possibility regarding the Mainline church's decline. Again, we can be encouraged by this. For we are afforded the opportunity to take a close look at ourselves, to learn from our own message, and to identify ourselves not by the inclusiveness which is, thank God, becoming more normative in our society, but, even better, by the distinctiveness of the gospel itself (which will challenge all those things which do not correspond to the gospel, including exclusivity). We can say with confidence that the inclusion of LGBTQ people is indeed an element of God's reign in the world, whether or not it contributes to the growth or decline of church attendance.

So all this is to suggest that we don't need to panic because the Mainline church is shrinking. In fact, we have reasons to be thankful that it is! We have reasons to affirm the good reasons that people are leaving the church and to claim those reasons, not as possessions of the church or grounds in themselves for people to go back (although some of that might be in there), but as elements and aspects of the Kingdom to which the church is only a witness. By looking soberly upon the declining church, we are reminded to hope not for the future of the church but to hope instead in Jesus Christ and his resurrection. Our future, whether we grow or not, is God's future (hint: it includes the salvation of the world and God's becoming "all in all")... and it is to that future that we are ultimately called to be faithful.
Posted by wellis68 at 9/17/2014 04:41:00 PM