Macho Jesus and The Theology of The Cross

I think a lot about the theology of the cross. To sum up the theology of the cross, it is that the cross is the deepest and fullest expression of who God is. God is associated with the crucified, present as our companion in shame and death, and revealed there, most fully, as the God of promise and resurrection. It has become, for me, a lens into all other theological reflection. This expression of who God is conditions all other claims about God. If we understand God as a God of power, as an "almighty God," it can only be a "power" and "might" that corresponds to the weakness and passion of the crucified Christ. Of course, there are other nuances which color this lens. For example, the theology of the cross, as I understand it, has an essentially eschatological orientation. In other words, while it is a claim of God's presence in death, it is the presence of the God who has resurrection as God's future, a presence according to promise. Thus, in a way (perhaps more directly at some times than at others), eschatology is the lens for theological reflection. As Moltmann has suggested, the theology of the cross and the theology of resurrection (of promise) are two sides of the same coin.

What might the theology of glory look like today in American culture? Unfortunately, we don't have to look very far. We can look back to George W. Bush's appeals to his faith during and in justification of his execution of "the war on terror." We can look to the apocalyptic rhetoric of dispensationalists who look forward to God's judgement of the world in fiery retribution. We can even look to patriarchal liturgies in many of our churches or at the crusader hymns in some of our hymnals. But I'd like to offer one more expression of the theology of glory that can help us understand what it is, one which we might have missed. More importantly I'd like to offer the theology of glory as an interpretive lens for understanding a particular phenomenon in American church culture... I call it the "macho Jesus" phenomenon. 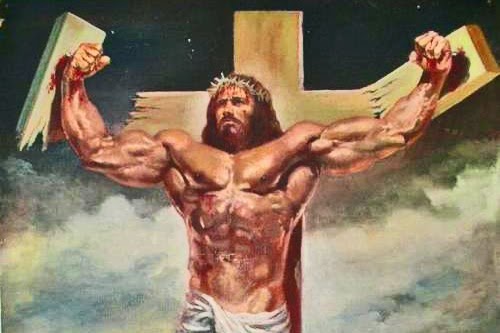 "Macho Jesus" is a reactionary trend found particularly in conservative churches. In reaction to images of Jesus as a gentle soul, an introspective sage, and a pious pacifist, the macho Jesus contends that Jesus was tough. Emphasizing Jesus' anger, especially the passage in which Jesus drives out the money changers in the temple (again, they seem to have missed the irony) proponents of the macho Jesus argue that Jesus was manly, proactive, and even aggressive in his mission to save the world. Concerned that the traditional notion of masculinity is fading in our culture (perhaps threatened by contemporary feminist influences and alternative sexual orientations), they present a masculine Jesus who doesn't shy away from violence if it's necessary. If you've heard a few Mark Driscoll sermons or seen the trailer for the film "Fight Church," you may have an idea of what I'm getting at. In Fight Church, there's a telling line in which (presumably) a pastor says, "Jesus never quit, Jesus never tapped out, he finished what he came to do." In light of the theology of the cross, this statement would be problematic. First of all, it implies that Jesus came in order to die, that dying on the cross was like lifting weights--no pain, no gain. But as John Bowlin has explained, Jesus' first intention was not his death. Bowlin relates Jesus' sacrifice to the "sacrifice bunt" in baseball. The motive was not (directly) to "get out"--to die--but to "rescue the runner and move him toward home." Secondly, and more important to our discussion, this idea that Jesus didn't "tap out" misses out on the weakness of Jesus on the cross. Indeed, "tapping out" is essentially what Jesus was doing when he prayed "into your hands I commit my spirit." Jesus' association with those who cannot go on, with those who have lost the strength to muster a defense, who are utterly defeated under the authority of the powers that be is lost in he macho Jesus phenomenon. Therefore weakness is never redeemed in Christ for it is never assumed by Christ (I carry with me a presupposition from Gregory of Naziansus: "That which was not assumed is not healed; but that which is united to God is saved.") And, like always, this agenda serves the power of the state, perpetuating American dominance and justifying American violence. It's Christian machoism, the assumption that Jesus' power is displayed in his violent opposition of his enemies, which justifies in many minds the expression American violent opposition of their enemies.

So let us imagine, with the New Testament, that Jesus is essentially the crucified Jesus, the weak and despicable Jesus... and only as such is he the God of glory and power. Let us imagine, with the New Testament, that death is swallowed up in victory, not through the expression of violence but through the experience of it assumed by the God of life who has resurrection as God's future. And thus, let us look with hope not only in our moments of strength but even (especially!) in our moments of weakness.

Good words. Thanks for your perspective tonight.

Fight Church? I seriously speculate whether or not Marc Driscoll is actually a crazy person, who is intentionally trolling the Christian world, just to see how absurd he can get and still have people take him seriously.

LOVE the "sacrifice bunt" analogy! I'm stealing it, of course.