A Reflection on Matthew 25 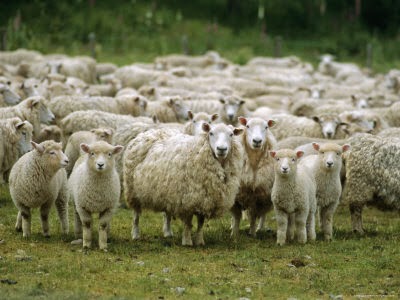 Matthew 25, the story of the separating of the sheep from the goats, is perhaps my favorite and least favorite passage in Scripture. If you don't recall, it's essentially a story about a king who awards and punishes his people based on their treatment of hungry, thirsty, sick, strange, marginalized, and imprisoned neighbors. It's quite a startling story to consider when you consider what service to a king might have meant in the minds to many of Jesus' contemporaries. Rather than an association with power and a service to the powerful, this king judges people according to their treatment of the very "least of these," calling them his brothers and sisters, and sharing in their identity as one (all!) of the poorest and lowliest people. And when interpreted in context, one might conclude that it is especially those from whom the religious impulse would normally be to run. This king goes as far as to say, "how you serve them is how you serve me." Of course, this flips the idea of religious authority and righteousness on its head. It is, in the end, according to Jesus, not in avoiding risky relationships or people who are on the outside or underside of society that one might protect their righteousness, but in engaging those relationships, serving, visiting, welcoming those people.

This is why this passage is both my favorite and least favorite passage in scripture.

It is my favorite because of what it reveals about God's action. The story ends up being a story about Jesus himself. And, since Jesus is the "image of the invisible God" (Col. 1:15), that makes it a story about God. The story therefore reveals not only a God who loves (even has a preferential option for) the poorest of the poor, but a God who is the poorest of the poor. This God, the God revealed in Jesus, the God of whom Jesus tells such stories holds nothing back in God's solidarity with humanity. In this way Matthew 25 points forward to the cross. There's no greater least-ness than crucifixion and hell. It is my favorite passage because it means that "neither height nor depth, nor anything else in all creation, will be able to separate us from the love of God that is in Christ Jesus our Lord" (Romans 8:39). It means that "if I make my bed in the depths," God is there (Psalm 139:8). That is the hope disclosed in the theology of the cross--God's love embraces humanity from the bottom up. There is no one so poor, such a sinner, so outside convention that God will not only love but with them share God's very identity. The only ones who are "out," as it were, are those who would exclude and marginalize others.

While this passage tells of God's boundless love for us, it also condemns us, even the church... especially the church. It tells us that those who are excluded by the church are accepted by God. It tells us that God is a woman, God is black, God is a child, God is gay, God is trans, God is disabled, God is anyone for whom there is no place in the church, from whom the welcome of the church is withheld... all this because "God is love" (1 John 4:8). This means that the church must be in the business of opening every closed door, then opening the closed doors on the other side of those doors. It is the best news in scripture and it is the most challenging news in scripture. I guess that's what makes it the Gospel.
Posted by wellis68 at 7/13/2014 05:13:00 PM