Easter as the World's True Nature

The resurrection is what gives meaning to the crucifixion of Jesus and the crucifixion is what gives meaning to the resurrection. The reason that Christ's presence in solidarity with crucified people on the cross has any light, even in its undeniable darkness, is because this Jesus has resurrection as his future. And the reason that resurrection has any importance beyond a mere miracle of human biology is because it is the resurrection of the one who united divinity to humanity, even crucified humanity. It is the resurrection of him who has met us in the deepest darkness, and who "humbles himself and takes upon himself the eternal death of the godless and the godforsaken, so that all the godless and the godforsaken can experience communion with him" (Moltmann, The Crucified God). In communion with him, as he shares our fate, we share his future. Therefore, when we witness the resurrected Jesus, we witness a future reality, our future reality, and our true nature. Resurrection is, because of who God is, the only natural consequence of God's crucifixion in Jesus, for God is indeed that whom God is becoming. God is God's future. And being brought into communion with God through hypostatic union, through Christ's gracious communion with us--even in death--we are made to share this future as our revealed nature. We are God's future. And God's future is resurrection.

As Carl Ullmann put it,


"The resurrection of Christ in particular...appears but as the natural and necessary consequence of the divine life which filled the constitution of his person; while it forms besides, in virtue of the life bond that unites him with his people, the ground of the whole Christian eschatology as connected with the resurrection of believers" (Carl Ullmann, "On The Distinctive Character of Christianity" in John Williamson Nevin's The Mystical Presence, 37). 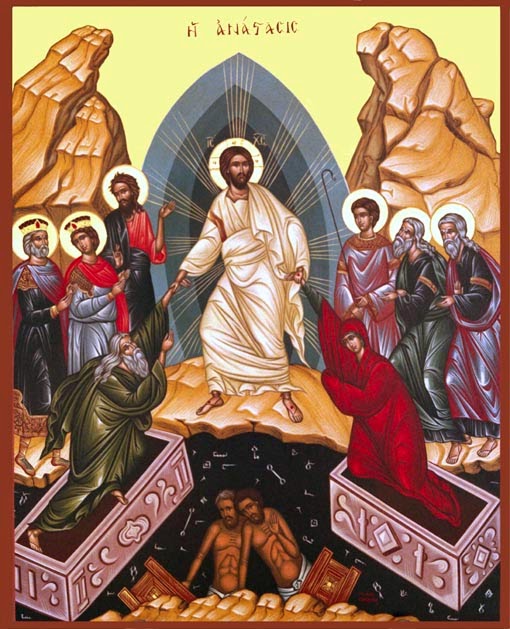 What constitutes the disruptive and unexpected quality of the resurrection is not its discontinuity with reality, but its continuity with reality in a world that is tortured by fraudulence. In other words, resurrection surprises us not because it is alien to the world but because the world is alien to its own true nature. Resurrection reveals the world by interrupting the world. In this, the resurrection shares the "cosmic and eschatological" character of the sacrament. As Alexander Schmemann describes it, "It refers at the same time to God's world as he first created it and to its fulfillment in the kingdom of God" (The Eucharist, 34).