Too Thirsty to Hope

When the people of Israel wandered in the desert, bound for the "promised land," liberated from slavery, lead by Moses... they did their fare share of complaining....

They get a bad rap for that.

Our impulse, at least my impulse, is often to look down on them for this. Why are they complaining? How could they? Don't they remember? Don't they remember that God just brought them out of SLAVERY?!?! Why are they giving Moses such a hard time!? He's the guy that brought them out of Egypt! How could they accuse him of intending to kill them? Why would they wanna go back to Egypt? Why would they wanna go back to Slavery?!?! 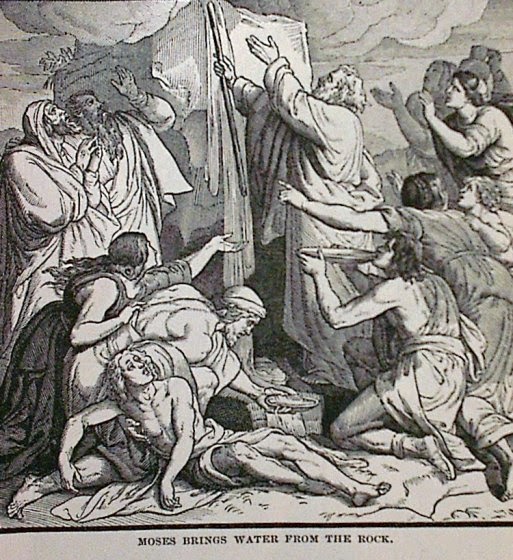 Well, I've been thinking about these stories of complaint. I've been living with one text in particular (yeah... I learned that phrase "living with the text" from Rob Bell... he's still my Bono). In Exodus 17:1-7 we have the Israelites complaining again. This time they're really complaining. They're so pissed off, they've even got Moses freaking out, saying, "God, what should I do? These people are gonna kill me!" Again, the impulse is to say, "quit your complaining, Israel! Don't you remember what God has done for you?" After all, this isn't the first time they've been in a bind and God helped them out of it. But if you read carefully, you realize that the reason they're complaining is because they're really, really thirsty. It says pretty clearly that "there was no water for the people to drink." It says, "the people thirsted there for water."

Now, I don't know all the circumstances, but I do know two things... the people were in the desert... and there was no water. Of course they're complaining! Wouldn't you complain? I've been to a few deserts in my time (yes, I realize that the word here is actually midbar which could just mean wilderness and doesn't necessarily imply sand dunes... but Rephidim, where the story actually takes place, was not exactly the redwoods. It was pretty barren). Deserts aren't cool (see what I did there?). The people were hot, they were in the middle of nowhere, and there wasn't any water. Yes, they were freaking out!

It's easy for us because we have the luxury of the narrative. We get to flip back a couple of pages and read about God giving them water earlier when they were thirsty. We get to go back a few chapters and remember they were just (at least it feels like just to us) liberated from Egypt. They just crossed the Red Sea. But it's easy for us because we didn't actually walk. We didn't hike through the desert to get to Rephidim. We don't look around us and see nothing to drink. And we probably just had a glass of water this morning. If we really wanted some water, we'd just have to go to the drinking fountain (I'm writing this from the Chicago Airport, so I can actually see a drinking fountain from where I'm sitting). It's easy for us because we're not thirsty. We scrutinize the Israelite's reaction to their situation because we're just not in it.

It's always easy for people who are standing outside our situation to scrutinize our reaction to it. Have you ever been going through a really hard time and someone said to you, "well, you'll get through it?" Have those words every really been helpful? There's always room for a little encouragement, but sometimes people act like you shouldn't handle it so hard. "Where's your faith?," someone might ask. Or, "why do you test the Lord?" as Moses asked the people...

But if you've ever been thirsty, really thirsty, you know it's just not that easy. Sometimes you're just too thirsty to hope.

I wonder if our impulse to scrutinize the complaints of Israel are just a creative way for us to scrutinize ourselves, our own reactions to our frustrating situations... perhaps its our way to refuse ourselves the right to be thirsty.

But if you've ever really been thirsty, you know you can't refuse it. If you're literally and life-threateningly thirsty, to refuse your thirst would be more than just unhealthy, it'd be death. This is true spiritually as well. If we're struggling, if we're thirsty, if God has brought us somewhere and it seems like the desert and we're wondering if there's anything to drink and we got here because we followed God but it seems like God has abandoned us and we know that where we came from wasn't the promised land but at least it had water... well, maybe this is just me... but if we're really, really thirsty, the only honest and healthy thing to do is to give ourselves permission to complain... and even to protest Moses' response.

The season of Lent is a season in which we give ourselves permission to be thirsty, to complain to God, and to be honest about the fact that we can't do anything about it... if that's where we are, Lent is the season to tell God that we're unable to hope... we're too thirsty to remember, too thirsty to hope.

It's really only when we admit our hopelessness that hope can actually emerge. Kinda like the cross of Christ--only death brings resurrection. Sometimes we try to get hope by avoiding hopelessness. We say, "even though it looks hopeless, it's really not. We can do something about it! We can change the world!" But I think there's a kind of hopelessness in that kind of hope. When I hear that message that says, "we are the world's best hope" I can't help but ask, "what about those times when I just can't do anything about it? What about when I'm just too thirsty to hope?" and then I end up even more hopeless, even more thirsty, because when I am my best hope, there's no answer for me when I'm hopeless.

The best hope is the kind that emerges in hopelessness.

...then there's that staff.

God tells Moses to take up that staff, the same one that broke the waters of the Red Sea, the same one that's been with them since Egypt. And when God could have responded with a curse, "damn you for being thirsty and questioning me!" God responds with streams of living water, flowing water, for the people to drink.

When the people could do nothing, God met them there... God hoped for them when they could not hope. God brought water from the most unlikely place. God brought hope out of the hopelessness. God brought life from death. When we are not our best hope... when we give ourselves permission to admit our hopelessness, God brings water from the rock. The God who is with us, even in the desert, the God who shows up when we feel abandoned, the God who demands not that we ascend from hopelessness but descends into it with us... This God is our hope... even when we're too thirsty to hope.