Some of the most important theological work of the past couple of decades can be summed up in the seemingly simple task of connecting the dots. Think, for example, of James Cone's work of connecting the crucifixion of Jesus with the lynchings in the American South (The Cross and the Lynching Tree), or William Cavanaugh's of connecting Torture to Eucharist (Torture and Eucharist), or even Andrew Root's work of connecting human ontology to children's experience of divorce (Children of Divorce). The real genius of this kind of theological work is to get us to think theologically about things we might not have thought to, to make theological connections we should have been making for a while, and to do it in specific and meaningful ways. I'm truly glad that Jake Bouma has brought together a group of authors to connect the dots for us between cancer and theology. 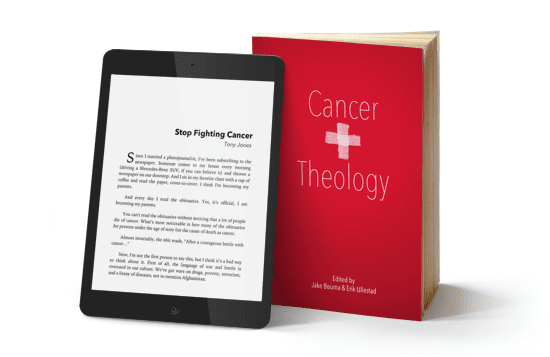 You'd have to ask someone who's actually dealing with cancer if this book was helpful for them. And, again, you have have to ask someone who's in the midst of watching their friend or parent or loved one go through cancer if this book was good for them. But as someone who hasn't been through it personally, as someone who has watched friends lose parents to cancer, and as someone who's only had to watch (can I say thankfully?) sorta the best-case-scenario version of the story in people close to me, I can say this book was helpful for me. I guess you could say that I feel some distance from cancer, but probably only because I've kept myself at a distance. Truth is, just about all of us have been affected, directly or indirectly, by the dark reality of cancer. It's definitely an issue that calls for deep theological reflection and Jake Bouma and all his contributing authors have pioneered that endeavor.

Rather than taking the issue up primarily through some distinctly systematic theological lens (though that might be needed too) the contributors of this book, all high powered theologians on their own right (Tony Jones and Andy Root both contributed chapters), took a more emotional hermeneutic--appropriate, I would say, for an initial step into the theological concern for cancer. Cancer brings out some deep emotions in us--in those close to it as well as those who've kept their distance. And many of us know from experience that theological platitudes have already failed at touching the heart of our experience. The authors who contributed to this book don't seem to have held back in offering raw and deeply reflective thoughts, making meaningful and important theological connections to help people think theologically about this dark passenger that touches so many of our experiences.

Think of Cancer & Theology as an initial step into some much needed theological work to be done in connecting the dots between cancer and theology. As such, I recommend it.
Posted by wellis68 at 3/26/2014 04:41:00 PM