Is My Baby a Sinner?

Several years ago I heard a Youth Pastor friend of mine give a message to his youth group about the doctrine of Original Sin. He began by showing pictures of his baby, not more than a year and a half old, and explaining how even his sweet little baby daughter was a born sinner. He talked about how selfish his baby was, interpreting cries for sustenance and care as signs of self-absorption, as though his child should be more considerate of her parents' needs. The point he was illustrating was simple—we're all sinners, we're all born with sin—but even back then, long before I was even thinking of having my own children, it was unsettling to me to think that someone could look at a baby and say, "yep... sinner."

While I generally affirmed the doctrine of Original Sin, I knew there was something wrong with interpreting the activity of an infant child as sinful actions. But I wasn't a parent, so I just shrugged it off and figured, "well, his point is true, I guess."

As years passed, my perspective on Original Sin has changed, and especially now that I have my own baby boy I am even more unsettled by the illustration employed so many years ago by my friend the Youth Pastor. Everything I've read about parenting, and every parental intuition I have, has gone to suggest that babies—at least in their earliest days—do not, cannot, manipulate their parents or be "spoiled" by them. In their earliest stages of development, children are practically and quite literally innocent. Some parents believe that they'll spoil their two-month-old by feeding them every time they want to be fed. Some parents think that there's something wrong with them if they're not, from the first days home from the hospital, transitioning their kids to sleep in their own room. Some parents are lead to believe that they're going to mess up their kid in those first days and make them too dependent or too attached. And I suppose if one were to take up this assumption then they'd definitely affirm the "sin" in their children, even from birth. But the truth is, as far as I can discern through experience and education, that this just isn't how it is. While spoiling is definitely a possibility later on, especially directly prior to and after the development of verbal communication, babies don't cry out of selfishness or inconsiderateness. Babies cry out of their need. They don't cry in order to manipulate their parents into responsive machines, their cries are not the actions of evil sinners with dark intentions, they cry because they're dependent, because they're experiencing pain, or even because they're frightened and they don't know how else to pray. So to say that babies are born sinners is strictly misleading. Babies are innocent.

So maybe it's not helpful to think of Original Sin the way, for example, Saint Augustine thought of it—as a state of guilt that's passed on through the generations (although I suspect that even Augustine had a more complicated understanding of what human guilt really looked like). It's not helpful to think of humans as "born-sinners." If for no other reason, it can't be healthy to look through that lens at every passer-by so that their primary identity is consumed by guilt of sin... especially when God seems to see us through the lens of love. People are not born as perpetrators of sin. They're not, from their first day, guilty.

But just because we're not born perpetrators doesn't mean that Original Sin isn't true. There are two ways, I believe, that we must affirm the reality of Original Sin.

First of all, we can, in fact, even after all that's been said, learn something about Original Sin from infants. Not, however, from their guilt and selfishness but from their need and dependence. We enter into the world in a state of utter dependence. We enter a world so unfamiliar to us. We cannot speak, we cannot see, we cannot understand what we hear, we cannot move and all we know how to do is cry... that is our most profound communication. In many ways, we never leave this state. While we learn to walk and talk eventually, the independence we're able to acquire is profoundly superficial in comparison to the depth of need which accurately describes our state of being. In the end, our most profound communication will always be cries for help to a God we cannot manipulate but whose love for us is our only hope. When we talk about Original Sin, we can think of it as an original state of utter dependence. Sin, in this sense, is not something of which we're guilty, but it's the death that threatens us if the God to whom we cry does not respond. It's there from the very beginning and so, from the very beginning, we must be placed at our Mother's breast and greeted by the smiling face of our savior over and over and over again in the darkness of our situation. 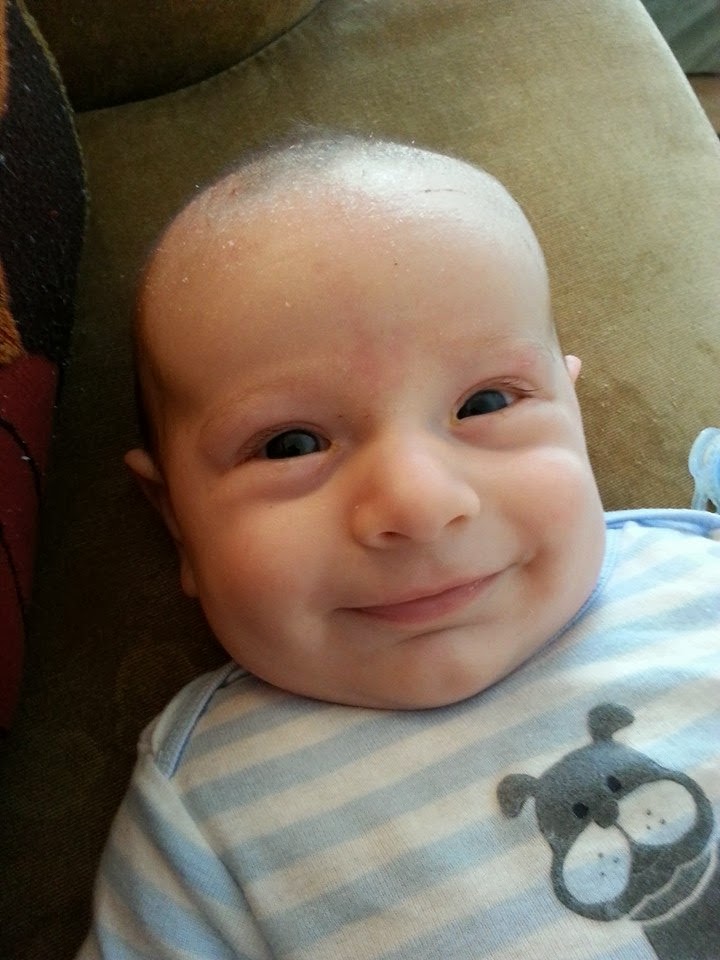 Secondly, and this point is quite similar, when we talk about Original Sin, we're talking not about something we're born with but something we're born into. Original Sin is not necessarily "guilt" in the sense that we're born as selfish manipulators with dark intentions. Original Sin speaks to the brokenness of the world in which we enter. Original Sin is the doctrine which says, "yes, the brokenness and violence and abuse and perversion you see around you actually does accurately describe the world you've entered." And in this sense, Original Sin is passed down through the generations. We inherit it... yes, even from Adam. We're born in the middle of a storm. While the world was intended for clear skies, we don't even know what those look like, because from the day we were born the winds of our frailty have been howling. Sin is our problem, it's even my innocent three-month-old son Henry's problem and I am just as helpless to do anything about it as he is... whether or not I am complicit therein (as indeed I certainly am).

So is Henry a sinner? Is he selfish? Does he manipulate me? Nothing in my experience or education can answer these questions affirmatively. Sure, he will be selfish and he will sin, but for now he's innocent, as far as I can tell. But Original Sin tells me that this world in which he lives is broken and meant for better, and in this world he is utterly dependent... and so am I.
Posted by wellis68 at 2/03/2014 09:18:00 AM

There is no One dogmatic doctrine about original sin in Church history. The transmission of sin remains a mystery and there is no census in the church fathers on the issue. You might find the contemporary Eastern Orthodox (Byzantine Catholic) position helpful. You might even find what I wrote here helpful: http://easterncatholicspiritualrenewal.blogspot.com/2012/03/spiritual-purity-of-children.html

The original proof-text for original sin is Psalm 51:5 Behold, I was brought forth in iniquity, And in sin my mother conceived me. (NASB)

Was David a sinner at conception? No. Was David a guilty of sin at his birth? No. David was a sinner only after he broke God's commandments.

Psalm 51: 1 Be gracious to me, O God, according to Your lovingkindness; According to your compassion blot out my transgressions. (NASB)

Psalm 51:2 Wash me thoroughly from my iniquity And cleanse me from my sin. (NKJV)

David wanted to be cleansed from his sin. David did not ask God to cleanse him from original sin.

Psalm 51:3 For I know my transgressions, And my sin is ever before me. (NASB)

Psalm 51:4 Against You, You only, I have sinned And done what is evil in Your sight, So that You are justified when You speak And blameless when You judge. (NKJV)

David did not do evil by being conceived and being born.

Psalm 51:5 Behold, I was brought forth in iniquity, And in sin my mother conceived me. (NASB)

David was conceived in a sinful world. David was born into a world filled with sinner's. David was not guilty of the false teaching of original sin.


Psalms 139:13-14 For You formed my inward parts; You wove me in my mother's womb. 14 I will give thanks to You, for I am fearfully and wonderfully made; Wonderful are Your works, And my soul knows it very well. (NASB)

God formed David in his mothers womb. God did not create David guilty of Adam's sin nor guilty of anyones sin. God does not create sin. How could a sinner be wonderfully made?

Genesis 1:27 God created man in His own image , in the image of God He created him; male and female He created them. (NASB)

God created David in His own image. Is God's image that of a sinner? David was created innocent of sin just like every person that God creates today. All men are created in God's image.

Mark 10:14 ..."Permit the children to come to Me; do not hinder them; for the kingdom of God belongs to such as these. (NASB)

Jesus said the kingdom of God belongs to children. Did Jesus mean the kingdom belongs to dirty little sinners who were guilty of Adam's sin at conception. Did Jesus mean that children who were sinners at birth belong in God's kingdom.
If the false doctrine of original sin is true how did these children have their sins wash away. Jesus gave this command after His death. Mark 16:16 He who has believed and has been baptized shall be saved...). Small children and infants are not guilty of sin.

Romans 3:23 for all have sinned and fall short of the glory of God,(NASB)