For ten years or so, my parents owned and ran a Christian book/retail store in Ramona, California. It was called Treasures Christian Store. It was just recently that they decided to close it down. It just got too hard to keep up with Amazon in a tough economy... especially when my grandmother needed almost constant care. So they closed up, which would have left Ramona without any bookstore if another store wouldn't have opened up just before the closing. This other bookstore isn't exactly a Christian store, but they bought some of my parents' books to sell in their store, in their "Christian Treasures" section.

While we were in town the other day, we decided to stop by this bookstore (I think it's called Unicorn Books). It has no stated biased--like a Christian store does--but it was hardly a-religious.  It sports a prominent Wiccan section, with crystals and tarot cards and things of that sort, right in the front of the store. I couldn't find a philosophy section or a history section... in fact The Portable Nietzsche was the only book of any real substance I found in my short browse around the store. And it has a space reserved in the back for palm readings for which you can conveniently make an appointment when you purchase your books. The store owner, one of the nicest ladies you'll ever meet, explained to us that the Wiccan resources were her sales generator. She told us how people would come in and thank her for being there because they had nowhere else to go for that kind of stuff. I knew this was ironic and strange for my mom to hear, knowing that people used to come and thank her for being open, and that was something that kept her going in difficult times. Now the same kind of appreciation was being applied to something quite foreign to what she had been doing. 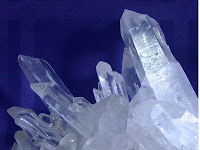 But is it all that foreign? Is there that big a difference between finding comfort in Wiccan spirituality and finding it in a Christian store?

When people came into my mom's store, thanking her for being there so that they could get what they needed for their comfort, their education, etc., I wonder how often their gratitude was actually directed toward something specifically and uniquely Christian. I mean, how many of them were all that different from Wiccan Spiritualists. I don't want to be too harshly judgmental of anyone, but Wiccan spirituality can be quite animistic. It is usually about manipulating indifferent, even potentially malevolent, spiritual forces into acting on our behalf. It conjures things, through ritual practices, that aren't presupposed and don't precede the practices themselves. It persuades spiritual powers.

Popular Christianity isn't all that different. It can be quite animistic too. And it can be even more harsh. We often presuppose a judgmental God--a God who, if we don't do something about it (like believe in Jesus or something), will condemn us and send us to hell. Or sometimes we presuppose a sort of deistic God, a God who doesn't really bother with us until we do something--say the right prayer or sing the right song. With such presuppositions, our religion is bound to be bent toward the manipulation of spiritual forces--in this case, God. Through our practices (either going to church, praying, doing morning devotionals, or even just listening to Christian music on the way to work), we seek to conjure a response from God, an attitude from God that doesn't precede and isn't presupposed by the practices themselves. We persuade God to love us, to heal us, to get us to heaven instead of hell... and so we're comforted by the presence of a Christian store in the same way that a Wiccan is comforted that they have a place to buy candles and crystals (not that all Wiccans utilize these things or that the utilization of these things is necessarily specifically Wiccan).

Books and bibles can be comforting for the wrong reasons. We can be grateful for them out of the false presupposition that somehow our access to them can put us in a position to gain God's favor. People are comforted by the hope that they can persuade spiritual forces to act on their behalf or to look on them with favor. But if that's what it's about then it makes no difference if you find this comfort in prayer books or healing crystals. Either way, such spirituality can hardly be called Christian.

Christian spirituality and Christian spiritual practice is definitively preceded by a God who is with us and for us. In a nutshell, Christian spirituality is about celebration, not manipulation or even intercession (although I'm open, on biblical grounds, to conversations about intercessory prayer). God's love and God's favor are its presupposition, not its result. The cross of Jesus Christ proclaims to us the good news that God is already and always with us and for us even in our darkest moments, even when the false god of condemnation and malevolence stands over us in judgement. Even in our own God-forsakenness, God is with us and acts on our behalf through Jesus Christ. Christian spirituality doesn't need to persuade God to love us... it is defined by the presupposition that God already loves us. That is why the Eucharist is the cornerstone practice of Christian spirituality; because in the midst of the mundane and even in the reality of broken bodies, it is a practice conditioned and defined by gratitude. We don't conjure Jesus' presence, we remember it... and we anticipate the re-membering of Christ's broken body. Christ's future, which is resurrection, becomes our future. We don't have to earn it. We don't have to manipulate spiritual forces to enact it. God's love precedes us. That is what Christian spirituality is really about.

So for those who are nervous because the gratitude that was once directed toward Christian books is now being directed toward candles and crystals in Ramona... perhaps you have no more to be nervous about now than you did when Treasures was still open. In the same way that God worked and moved in people's animistic anxieties in a Christian store, God is capable of working and moving in stores with palm readers and tarot cards. God precedes us... no matter where we are.
Posted by wellis68 at 8/30/2013 11:50:00 AM

If I had to summarize this article in just two words it would be God's sovereignty. Thanks Wes.

Thank you for this very honest look at the way that many of us approach prayer and worship. It is so wonderful and so true that nothing we do can cause God to love us any more or any less than He already does. He wants our heart, our soul and our mind, not our performance!

Followed Of Dust and Kings over.
Strong stuff and far too typical. It's just so EASY to have things to do to get God to do things our way. A relationship with the God who is there is much more work and doesn't promise the same kind of on/off switch.
Thanks for taking on such a practical topic. I heard a woman who fell for Wiccan and then God rescued her talk about what drew her in. What you describe sounds very much like what she talked about.
I've watched my own brother be careful to pay his tithe to be sure of blessings that week. It's nice to have a worldview to compare such thinking to. :-)