The Day The Music Died: Some thoughts on the whole Miley Cyrus thing... 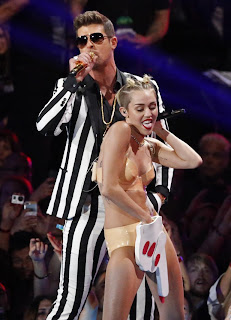 I'm not sure what else actually needs to be said about the whole Miley Cyrus thing... it seems like everyone who has a blog is saying enough (check out what Bo had to say at Homebrewed Christianity). Nothing Miley did is really new. Music in the service of shock-factor has been the status quo in pop music at least since Britney Spears became the Madonna of her generation. But after Mumford and Sons and the Lumineers became so huge, I was beginning to think that music was heading in a different direction. Perhaps what frustrates me more than anything else about Miley's dry-hump-escapade is that it was such a shameless attempt to freak people out. It wasn't about the music or about making some artistic statement (other than "Hannah Montana is dead"), it was about shock-factor. Creativity was sacrificed to the gods of sensual opulence and spotlight-theft. Where some hint of creativity seemed to be sneaking its way back into the mainstream music world, Miley's performance did its part to steal the spotlight. I'm not nearly as angry about the tongue... thing... or the foam-finger-crotch-grabbing as I am about what this sort of thing does to our culture's conception of music and its value for creativity.

I lament the death of music--music for the sake of creativity, of self-expression, of political protest, of some depth or significance at all whatsoever... indeed I lament the loss of music's "ultimate concern," at least in the pop-cultural form. ...more even than I lament the vulgarity of Miley Cyrus' performance. The sacred and religious depth of cultural expression finds its nemesis in performances such as these.

There is definitely more to be said about the objectification of the human body--especially the female body--and the devaluation of human relationships... but I'll let others say that stuff for now.
Posted by wellis68 at 8/29/2013 06:47:00 PM