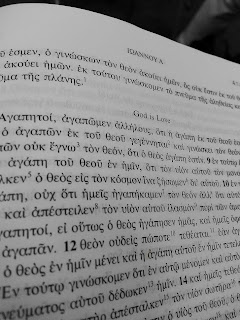 This summer I've been taking an intensive Biblical Greek course in which we've recently begun translating the letters of John. I'm realizing anew just how strange, even incoherent at times, the Johanine letters can be. I mean, at one point the author's saying, "if we say we have no sin, we're liars..." and they go on to say that we're "children of God... " but then it goes on to say, "No one who abides in God sins; no one who sins has seen God or knows God" (3:6). What's up with that?

But despite their issues and eccentricities, the letters of John have some beautiful overtones and fascinating details. There's mystery to them. There's a paradoxical element--the element of holding two polarities in tension (the polarities of human dignity and human corruptibility). They're creatively poetic and prophetically challenging.

Among the most interesting verses in 1 John is in 1 John 3:17, where it says,


"...whoever has the world’s goods, and sees his brother in need and closes his heart against him, how does the love of God abide in him?" (NASB)

It's a rhetorical question. The answer is assumed. The love of God, according to this passage, cannot remain (or abide) in the person who closes their heart to the brother or sister in need. The verse is of particular interest in the Greek because it bears in it two idioms which give unique insight into the meaning of the passage.

It opens with the phrase (and bear with me here... I know how pretentious it is to use Greek and Hebrew as though you know it, but it's been in my head for the past several weeks... I gotta get it out), "ὃς δ’ ἂν ἔχῃ τὸν βίον τοῦ κόσμο...," which in a wooden-literal translation would say, "whoever but (read: 'but whoever') has the life of the world..." and then it goes on to say "...and sees a brother or sister in need..."

This phrase, "life of the world" is an idiom for "worldly possessions" or something of that sort. It's simply trying to convey the image of someone who has what they need coming across a brother or sister who does not have what they need. While reading into an idiom too much can be misleading and interpretation should be taken with a grain of salt, I think this helps us see a connection between life and means. This idiom is perhaps similar to our idea of "...making a living." It's not just toys we're talking about here. It's the stuff required for life, for survival. What do we make of the idea of the "living" being "of the world"? I don't think it makes sense here to assume some dualism between "of the world" and "of God." The world, as referred to here, has an important connection to the love of God remaining in someone. I think this idiom directs us to think about possessions, and meeting the needs of others, in a very holistic way. It's not just mine or yours, it's the world's. It's ours. Life is for everyone. So the things and conditions necessary for life are to be shared among us.

Again, take the interpretation with a grain of salt, but it can't hurt for us to think of what we have, not just as objects for our consumption but as "the life of the world" to be shared universally.

The second idiom is perhaps more profound and more important. That phrase, "...closes his heart against him..." comes from the Greek, "κλείσῃ τὰ σπλάγχνα αὐτοῦ ἀπ’ αὐτοῦ," which literally means "closes the inward parts of him from him." That word for "inward parts"--"splagchnon"-- can be rendered as "innards," "intestines," or "guts" in other contexts. Idiomatically, it's similar to our use of the word "gut," as in the phrase, "...feel it in your gut." As a verb, the word means "compassion" ...and as such, I think this gives us a great insight into the concept of compassion. Compassion means opening our "inward parts" to others... it means more than meeting need... it means feeling their need in our guts.

Compassion is more than sympathy. It can't be done from a distance. Indeed, it cannot even be done externally. We can step into someone's situation and help them, but that still is not essentially compassion--that's still not the essence of what it means to love and for the love of God to "abide" in us. The compassion to which we're called focuses as much on what happens inside the person as it does on what happens externally, to the situation of its object. It means opening up, dismantling the barriers, and allowing the other to penetrate the self. It means feeling it in your gut. It means opening your inward parts, opening your heart, to those in need when you have the "life of the world" to share with them. Compassion means blurring the boundaries between the other and the self, between their problems and our problems, between the things in us and the things in them.

Compassion, as a category of love, is an expression of God's love "abiding" in us. This is how God's love abides in God's people--God's inward parts are opened to us. God takes our being into God's being. God becomes one of us, even dies with us. God refuses to stop merely at meeting our need. God feels our need. God opens God's inward parts to us even in our greatest need and even when those inward parts are in their darkest and most painful state... and so we are invited to do the same. We are invited to take up the cross and follow Jesus in this way, to open our inward parts even to those who are in the most profound need... even to the crucified.
Posted by wellis68 at 8/20/2013 09:21:00 PM