Nothing Will Change: a reflection on parenthood and Eucharist

Since my wife became pregnant, people have been telling me things like, "everything is going to change!" "Nothing will ever be the same again!" and occasionally something like, "wow... good luck..." All of these messages have signaled to me that I am about to experience total upheaval, an irreversible innovation to that which was formerly known as my life.

But today a friend of mine (a guy named Marcus Hong... watch for him, he's probably gonna write books someday), himself a recent father, gave me a slightly different message...

"I know everyone's been telling you this," he started--which prompted my anticipation of the usual prediction of upheaval--"but I'm gonna give you my spin on it..."

"...but everything will have a change in it."

He went on to tell me that my life will still be the same but, at the same time, everything will be different. This new relationship is gonna condition all that which has already, until this point, constituted my life and action. I was reminded of the way N.T. Wright has liked to talk about heaven... both as continuity and discontinuity--familiar but unexpectedly different from what we've formerly experienced, the same stuff infused with new significance, conditioned by something new. 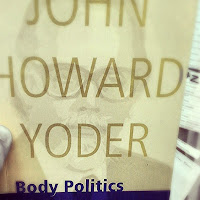 It just so happened that right before our conversation I had been reading John Howard Yoder's chapter on "breaking bread" in his book Body Politics. I couldn't help but draw a connection between Yoder's comments on the Eucharist and Marc's comments on parenthood. Yoder doesn't buy the hypothesis that when Jesus "instituted the sacrament" he was instituting a new ceremony--a mass or a special spin on a once-a-year celebration. He writes,

"What Jesus must have meant, and what the record indicates that his first followers took him to mean, was "whenever you have your common meal." The meal Jesus blessed that evening and claimed as his memorial was their ordinary partaking together of food for the body" (16).

Jesus' words of institution were not about a new ritual or a total upheaval of a previous pattern. It was about an ordinary thing remaining and taking on new meaning, being infused with radical significance. The Eucharist was to change nothing, but to bring with it a change in everything--specifically in the common meal. It brought with it "...no innovation; it was merely the resumption of the way they had been living together with Jesus for months... The common meal had not been an innovation, but a fulfillment of long-standing expectations..." (17).

Parenthood, like Eucharist, is not a total innovation, "but a fulfillment of long-standing expectations..." Nothing will change, but everything will have a change in it. How so? Relationship.

Andrew Root has taught me that people are their relationships. Jürgen Moltmann has taught me that "relationships are just as primal as the things themselves" (God in Creation, 11). We are our relationships. When we eat together, we engage in nothing new, but a change comes to everything. Parenthood and Eucharist are both about relationships and they're both about grace. In the sacrament of Communion, we will always have communed with Jesus (think about that for a second), we will have always consumed our relationship with him into our being. This relationship is infused into everything--every meal and every act of life--it infuses gratitude into our very life and being (Eucharist means, in simple terms, "thanksgiving"). As our communion with Christ conditions every common meal, our relationship with this new child in parenthood conditions our common life; in profoundly spiritual ways as well as in obviously practical ways. As in Eucharist, in parenthood the grace of God finds correspondence in human action, both in terms of the methods of parenting we choose to take up and in the creation of a new relationship. This relationship isn't earned, it comes as a gift. It invades us to our core and changes who we are. As such, we become a new species of ourselves. We are the same... but different. Nothing changes, but there is a change in everything.
Posted by wellis68 at 8/15/2013 06:02:00 PM

"Nothing changes, but there is a change in everything." So true, in parenting and in the life of faith. Also a fan of the Lord's supper being an every meal time, not a church time ritual.