In Christ Alone: Love and Satisfaction 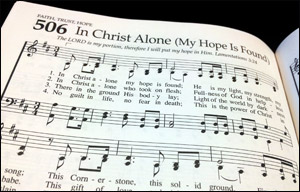 I've always enjoyed that song, In Christ Alone. It's one of those classic worship songs that just about every contemporary/evangelical church includes in their worship from time to time. The lyrics are theologically rich and beautiful... right until you get to the second verse (I appreciate that Owl City chose to skip it in their version) where it goes,

"'Til on that cross as Jesus died
The wrath of God was satisfied..."

Whenever we get to that line, I stop singing until we're past it. The theology behind this satisfaction language, the language of God's wrath being executed on Jesus in crucifixion, is from a theology of the atonement that's popular among conservative evangelicals and fundamentalists--what's often referred to as the penal-substitutionary atonement model. The preceding image is one of a God who cannot be satisfied until someone suffers for the sin of the world. It's an image of a God who is "just" in a very specific definition of the term--a God who has been wronged and who, according to justice, cannot be satisfied until he (and I use the masculine pronoun here because this is usually a very masculine image of God) takes out his anger on someone, anyone he can find to punish for the crime. The God has kept a record of the wrong committed against him, and won't rest until somebody is punished. The presupposition here is that justice demands punishment and that punishment (not reconciliation) is what satisfies the kind of wrath which is compatible with this form of justice. Punishment, in this theology, is desired by God as an intrinsic good. In other words, God is angry and needs to take out his anger on someone, even if that someone is innocent and helpless. It's a theological and ethical mess!

Do you see why I can't sing that line?

I was taken aback when I saw those lyrics in the bulletin. I was pleasantly surprised that the wrath language of penal-substitution was gone, but what sense was I to make of God's love being satisfied in the death of Jesus? I mean, I'd rather have incoherence than total blasphemy, but what image precedes a statement like this?

We are given the image not of a God who is satisfied by the death of an innocent, but a God who cannot be satisfied until God is finally with and for crucified people. We have a God who so loves the world that God longs to be with us so much that God would even follow us into our deepest darkness, the darkness of shame, of torture, of death on a cross. Godforsakenness itself cannot keep this God's love away from the ones who need it the most. This God's love cannot be satisfied with watching from a distance. No. This God's love will descend even into hell, will break the rules of "justice" and the reign of death in order that light may shine in the darkness, that resurrection may visit the crucified even in their crucifixion.

"'Til on that cross as Jesus died
The love of God was satisfied..."

Now, I think we should make a habit of being suspicious of satisfaction language. Whether because it might sacralize the event of torture itself or simply because it's not exactly biblical, we need to be careful talking about God's satisfaction in relation to the cross. Other modifications have been sung before including, "...the love of God was magnified." But the preceding image of a God who longs to be with us and joins us in our abandonment is definitely something to sing about.
Posted by wellis68 at 8/09/2013 01:33:00 PM