Breaking the Reign of Capitalism and Philanthropy in Relationships

I'm sitting here on a rainy day in Princeton at the local Starbucks coffee shop (there're actually several local Starbucks coffee shops), enjoying my "grande" iced mocha. As I sit in close proximity to the counter, I can hear people ordering their drinks and picking them up, sharing cordial and friendly conversation with the folks behind the checkout counter. I'm struck by the friendliness and especially the overall ease of the interactions. The people here don't know one another any better than the folks riding a public bus, staring at their feet in silence or pretending to be on the phone. There's no easy or natural way to conduct a conversation with a stranger on a bus. What makes these conversations at Starbucks, between customers and "baristas" so easy, so natural? I'm sure that it has something to do with the mutuality of the place. The customer has something to offer (namely money) and the barista has something to offer (a half-decent cup of coffee and some pastries). But it's a warped kind of mutuality isn't it? Nobody expects any different here, we wouldn't have it another way, but the mutuality here is a conjured sort. It's not about sharing, it's about exchange and transaction. And somehow, in this culture, this relationship of exchange—indeed, a counterfeit sort of mutuality—has become much more comfortable and natural for us than actual relationships of mutuality and sharing.


In many ways, mutuality in relationships—the kind of mutuality that involves authentic personhood and caring—has been swallowed up by capitalism. The exchange feels more natural to us than the gift, we are in our safe zone when there is something to purchase. It's even hijacked our friendships, I think. I tried to buy a friend some dinner a few weeks ago because he forgot his wallet... but as soon as we saw each other again, he handed me some cash to pay me back. Of course I took the money, lets not go crazy, but it was interesting to me how uncomfortable he was... and he wasn't gonna be comfortable again until he paid me back and the slate was clean. He "owed" me, so he paid me back. The conjured mutuality of exchange and transaction was much more comfortable than the mutual relationship of gift and reception. 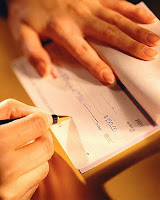 If our mutuality in relationship is not swallowed up in capitalism, then it's at least been lost in philanthropy. According to its etymological origins, philanthropy is the "love of humanity," it's the work of nurturing and affirming what it means to be human. But today we've narrowed it down to donating and volunteering. Now, I wouldn't want to discourage people from volunteering and donating, but in its most common forms, philanthropy hardly nurtures what it means to be human, unless we narrow that definition down to needs and wants. Needs and wants are definitely taken seriously in any full definition of what it means to be human, but people—more fundamentally—are not their needs and their wants. I tend to agree with Andrew Root when he says that people are their relationships. To nurture humanity, then, is to nurture authentic relationships, mutual relationships. When someone writes a check and sends it off to a child in Africa who they've never met, it might be kind and it might be generous, but its not a relationship and therefore its not really philanthropic—it doesn't directly nurture what it actually means to be human. In fact, it can be received more as condescension than as a gift (and this, I believe is where a lot of the tension between rich and poor has developed—not merely in inequality itself but in the misunderstanding between the two when a 'rich' person is trying to be "philanthropic" and the 'poor' person receives their offer as insincerity and insult). When someone helps build a house in Mexico, again, it might be good, compassionate, and even necessary, but if we do that in place of actually sharing in the humanity of people, then its just a counterfeit version of mutuality and relationship and it can't, in any holistic way, nurture what it means to be human. People are their relationships and relationships are about giving and receiving, not donating and volunteering.

The fact is, there's a little truth in both of the lies—the lie of mutuality hijacked by capitalism and the lie of relationship replaced by pseudo-philanthropy. Just as in the capitalistic transactional exchange, in any real relationship, both parties have something to offer. But it isn't money or coffee, its the gift of personhood. Exchange feels comfortable precisely because of this element of truth that exists therein, but the transaction leaves us empty (even if we are filled with coffee) because the relationship isn't actually about relationship when it's all said and done and the persons are reduced to functions—buyers and sellers. There's no gifts, just products.

We need to reclaim the art of mutuality in relationships that's been lost in philanthropy and swallowed by capitalism. In order to do that, we will need to get better at giving and receiving rather than buying and selling, better at sharing and caring rather than donating and volunteering. We will have to learn one another's names, not by reading them on a name tag or writing them on plastic Starbucks cups. We will have to care for one another, not by sending a check or building something, but by sharing time together and suffering together. We have to start looking at and talking with the people who aren't selling coffee if we want to nurture what it actually means to be human.