The UCC's a Good Place To Be

I've had my qualms with my own denomination... 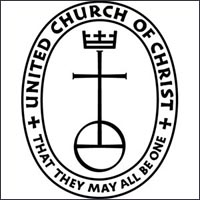 Perhaps it's not wise or conventional for a "Member In Discernment" (the UCC's ordination track) to voice their frustrations with the denomination, but I happen to think that that's what being a "Member in Discernment" is all about—discerning how well you fit in the denomination. And it's true for me that I don't fit perfectly in any denomination, so I don't think it's odd for me to find things in my own that don't line up with my personal and vocational identity. That being said, my own qualms with the UCC haven't been so much about theology or social ethics—I'm proud to be part of a denomination that's committed to reconciliation with and justice for the LGBT community, I'm glad that there's less theological policing in it, and I appreciate the attention and sensitivity to gender-inclusivity and gender-inclusive language that's part of the ethos of the UCC on the broad scale. My frustrations have revolved around style, marketing, and theological discipline (I'm convinced that there's something between theological policing and the sort of laissez-faire approach to theological accountability that seems to exist at least on some levels of the UCC).

While I may struggle with some things in and about the United Church of Christ, I am discovering just how grateful I am to be part of this denomination.

I'm a student at a fairly large Presbyterian seminary... ok, so it's sort of the flagship seminary for the PCUSA. About half of the students at Princeton are Presbyterian and the rest are a mix-and-match of just about every other denomination you could think of (even a generous portion of Pentecostals). So it goes without saying that I'm outnumbered (including myself, there were only 5 students in my UCC Polity class—3 of whom were not actually officially part of the UCC).

So I've become, ironically in some ways, a sort of apologist for the UCC at Princeton... one of few who are familiar enough with the denomination to explain its ethos and polity to people outside the tradition. And I'm discovering that the more I explain the UCC to folks, the more excited I am about being a part of it. When I listen to stories of the doctrinal hoops that many of my Presbyterian sisters and brothers have to jump through for their ordination, when I hear about the debates and controversies happening in other denominations over the issues of gay marriage and LGBT ordination (not that the UCC is totally united on this issue... it is important to remember the congregations and conferences in the UCC which are not comfortable with the General Synod's openness on this issue), and when I confront less inclusive theological traditions, I am always relieved to be a part of a heritage such as mine.

This morning I got into one of those conversations. As I explained what I know about the UCC, we got onto the subject of feminist influence and gender-inclusive language. My friend said something like,
"so they don't sing 'him' when they sing the Doxology? They don't only say 'Father' every time they pray the Lord's prayer? ...I thought that was something that people just had to put up with as part of the tradition..."
"Well, you don't have to put up with it in the UCC", I responded, also acknowledging that different congregations handle language in different ways even within the UCC (for example, in my church back home, they're quite comfortable with the exclusive "Father" and "him" in their liturgy, but many if not most UCC congregations are more intentional).

There's a tradition which is, at its best, firmly committed to the gospel of Jesus Christ that does not force you to "put up" with it. You don't have to put up with the kind of exclusivity and doctrinal/moral purity that exists throughout the church in the U.S.. Where some denominations are facing the potential of treacherous splits over theological and social issues, it seems that the roughest days of those particular struggles for the UCC are behind us (of course rough, perhaps rougher, struggles may lie in our future). People other than white-male-heterosexuals can be accepted and empowered in their calling to ministry.   You don't have to have a neatly organized doctrinal system. Creativity and openness are valued in theological discourse.

These values exist in many denominations but few sport them on such a broad scale as that which is represented in the UCC. Few can claim them as part of their general ethos, even where disagreements still persist.

So with all its problems, and even though I might be (and I stress might) somewhat more of a traditionalist in my own theological reflection than many of my UCC colleagues, I'm quite proud to be part of the UCC.
Posted by wellis68 at 4/08/2013 10:19:00 AM

I wish you could see the smile on my face right now. (1) I'm not surprised that you're having this reaction. And (2) it's exactly the sort of experience I'd hoped you have - not to get you to a particular place or thought, but just to bring your discernment a step or two further along. Good words!