When Jesus rode into Jerusalem, he was greeted by a crowd of people celebrating his coming and welcoming him with songs of triumph. What exactly did they expect from Jesus? Salvation, surely. As much is implied in the cry, "hosanna!" which they are reported to have shouted. But by what means were they expecting this salvation to come? The grounds for speculation are solid. Their expectations were likely of insurrection and revolution. Like Judas Maccabaeus or Joshua, Gideon, or even David before him; the crowd likely expected that Jesus would fight for the restoration of Israel. They wanted a king who would punish their oppressors and bring justice to the world. They wanted someone who would make things right. 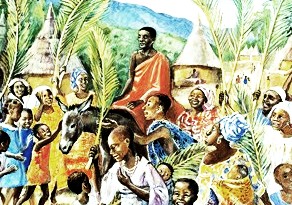 Were they wrong to expect salvation? Surely not. Wrong to expect justice? Of course not. Was it even wrong for them to expect revolution or insurrection? You can hardly hold it against them if they did. Their situation was dire and coercive power was a conceivable method, perhaps the only conceivable method to some, for conquering the coercive power of Rome. Other options were on the table too. Some had the privileged option of giving up on restoration. The Sadducees had certainly given up on hopes for the restoration of Israel. Rome, for them, was the new status quo and going along with the powers made better sense than usurping them. The Essenes too had no immediate expectation of conquest, though they preserved themselves for an eschatological spiritual conquest. But for those who still held out hope for a messiah, coercion (whatever its form) was the natural expectation.

But despite their expectations, they got Jesus... a poor man from Nazareth who taught his followers to love their enemies, who served when he should have been served, and who was eventually tortured and executed by the very powers they expected him to usurp. But were they failed in their expectations for restoration and for justice? In the end, surely the execution of Jesus, by way of his resurrection from death, served to expose and undermine the powers. And by dying a sinners' death and suffering the powers of sin, Jesus took on the plight of the human situation, conquering death and vindicating the victims of sin through resurrection. Jesus brought restoration through self-emptying love and not through force or violence. Jesus left the expectations unmet and yet went beyond the expectations of those who cried, "hosanna!"

Are our expectations much different from theirs?

I've heard, more than once, the expectation expressed that when Jesus "comes again," he will come with sword in hand riding on a white horse. All the irony of Revelation is lost and the expectation is upheld that Jesus will still—though it was nice that he was so merciful the first time—come to usurp the powers, punish his enemies, and make miserable the ones who curse God and make God's people miserable. We still expect Jesus to fulfill our original expectations, to come differently than he came before, as though the means he took up the first time weren't authentic or weren't quite good enough. We still want our enemies, God's enemies, to be punished! This is what Paul Tillich called the "sin of religion," the assumption that our enemies must be God's enemies and that they must be eradicated in order to make way for justice.

But there is no Jesus but the Jesus who suffers on the cross. And there is no God except the God revealed in Jesus. And there is no justice but the justice exercised in the loving mercy of the God who assumes the guilt and the suffering of God's people.