"Creation is complete; new creation can now begin. The Spirit who brooded over the waters of creation at the beginning broods now over God's world, ready to bring it bursting to springtime life..." -N.T. Wright (The Challenge of Jesus, 176)

The God of all creation, of life and incarnation, has met us in death and despair... brokenness has been caught up in God's divinity and death's power has been broken in love. "Christianity is faith in a God who enters death, who is overcome by the monster so that the monster might be overcome" (Andrew Root, The Promise of Despair, 75). And the monster has been overcome. Because the experience of the desperate, the oppressed, the dead and the dying has become the experience of God; so has the future of God - the resurrection of Jesus - become our future. Jesus meets us in death and leads us in resurrection.


"Christ has indeed been raised from the dead, the firstfruits of those who have fallen asleep. For since death came through a person, the resurrection of the dead comes also through a person...Then the end will come, when he hands over the kingdom to God the Father after he has destroyed all dominion, authority and power. For he must reign until he has put all his enemies under his feet. The last enemy to be destroyed is death" (1 Corinthians 15:20-25). 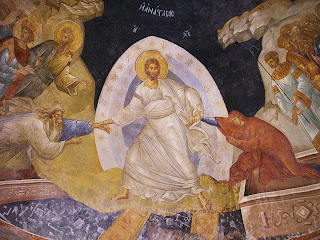 Easter Sunday is the announcement that death cannot last for it no longer belongs to this world. The resurrection, as our true future and the true direction of history, stands in judgement over the systems and powers of abandonment, death, and despair. Life has visited us in the death of the present. Resurrection brings new life out of death... a new eon, no longer progressing only from life to death but from death to life. The Christ who shares our suffering is risen from the grave. The tomb of death has been opened to a garden of new creation.

A new day has dawned, a new word has been spoken, a new reality has been proclaimed, and new creation has infiltrated the gates of hell. Christ was dead and is now alive! The one who loves us, who opened Godself to us, who shares God's very identity with us has been vindicated over the monster and now walks so that we may walk, dances so that we may dance, laughs so that we may laugh.

Life has filled the space left empty on the cross. Dignity has been restored to the suffering, light has pierced the darkness and the tomb is forever open. The one who made it all has given it all and has redeemed it all! Christ, the Lord, is risen today! Hallelujah!


"Death is swallowed up in victory. O death, where is thy sting? O grave, where is thy victory? The sting of death is sin; and the strength of sin is the law. But thanks be to God, which giveth us the victory through our Lord Jesus Christ." (1 Corinthians 15:54-57)

What we do here matters, who we are here matters, our pain here matters--what we create, what we know, what we strive for and suffer--it all matters because it does not simply end in death... death does not own this world... the earth is the Lord's and everything in it, for the body of Christ is risen from death!


"Therefore...stand firm. Let nothing move you. Always give yourselves fully to the work of the Lord, because you know that your labor in the Lord is not in vain" (1 Corinthians 15:58)