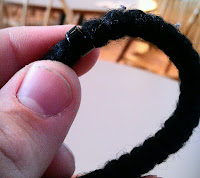 On Ash Wednesday, our church community held our first Lenten morning prayer meeting at 6:30am. We're meeting every Wednesday morning for prayer, coming back consistently to The Jesus Prayer as our centering prayer. On Ash Wednesday, whoever wanted to have them received a Prayer Rope. Borrowing from the Eastern Orthodox tradition, we use the rope to guide our prayer. Ours have 33 knots tied into them, one for every year of Jesus' life, and that's how many times we say the prayer together.

There's something profound about the Prayer Rope simply in that it is something physical. Often, prayer becomes a disembodied practice for us. It's something that happens in our brains and in our hearts, but it seldom has anything to do with out hands, our fingers. As our fingers pass one knot after another, we are drawn not only spiritually, in some disembodied sense, but physically into this confession. The rope is something real, something with texture and frays. It has a sort of local particularity, it's small, it's mundane, and yet it draws us - in no overtly supernatural way - into the recognition of a reality that simply will not be localized or conditioned (see the 'Lord' post). We physically hold between our fingers 33 knots with specific significance, the significance to remind us of a particular and specific person, a man from Nazareth. It represents the paradox of existence and essence, the paradox of praying a prayer which begins, "Lord Jesus..."

Those with reverent sensibilities toward Jesus might find it shocking for someone to suggest that there's anything paradoxical or even ironic about praying "Lord Jesus..." (and I wouldn't want to stifle that reverence in any way, in fact I want to join in it). But there is something profound, even scandalous about praying such a prayer.

Jesus is sorta the star of the show... in more ways than one. After all, the prayer we're thinking about here is called "The Jesus Prayer." It's specifically addressed to Jesus. But who is Jesus?

Well, in the prayer we address him as 'Lord,' which is, as we have already discussed, more than a title, it's a reference to a transcendent God. But Jesus is a person, a human being, a man from Nazareth - this can't be lost. He existed in a specific time of history, occupied a particular space, spoke a specific language, and dealt with definite and local political realities. Jesus was not a spirit or a transcendent concept. He was a physical and living person with texture and frays. He was a body with breath like you and me, a body which endured suffering and was eventually broken. We pray to a fellow victim of injustice, a fellow victim of the brokenness and alienation of humanity.

To address our prayer to Jesus is to attest to the significance of the particular. When we pray to a person who shares in human experience, we pray not to some outsider. We are not looking up and out to some "wholly other" who exists above us. We are praying as to one within our human community; looking down and within, not up and away.

And yet, this Jesus is addressed as 'Lord...'

If it is not a paradox then it's simply an absurdity.

We see in Jesus the depth of existence. In Jesus we see the mystery that this Lord, this unconditional reality, is not distant and disconnected, not above us and outside of us but bursting forth from among us transforming and disrupting us. Jesus is Lord! This is our confession. The sacred visits us in the mundane. The eternal infiltrates the finite. Our particularity is assumed and healed by a God who knows us as one of us.

When we pray "...Jesus..." we open ourselves to discovering God in the particularity of human life.


"’Tis so sweet to trust in Jesus, And to take Him at His Word; Just to rest upon His promise, And to know, 'Thus says the Lord!'
Jesus, Jesus, how I trust Him! How I’ve proved Him o’er and o’er Jesus, Jesus, precious Jesus! O for grace to trust Him more!"

Email ThisBlogThis!Share to TwitterShare to FacebookShare to Pinterest
Labels: JesusPrayer