"A proper theology would therefore have to be constructed in the light of its future goal. Eschatology should not be its end, but its beginning." -Jürgen Moltmann

"The Kingdom of God will always remain transcendent, but it appears as a judgement on a given form of society and as a norm for a coming one" -Paul Tillich

What's the real problem with Premillennial Dispensationalism? ...or, to put a finer point on it, what's the real problem with the Left Behind series? Well, there's a list of answers to this question, but I think perhaps the biggest issue is that it has no eschatology. "Strange," you might say, "I thought that millennialism was always about eschatology." And in a sense, it's true... it will always have something to do with where things are headed, with ends, and as such, with the eschaton. But in its proper sense, eschatology is not just about the future but about the degree of bearing which the 'future' has upon the present. Eschatology is determinative, normative, and therefore critical of the systems and structures which constitute our present situation. Therefore, when the 'future' ceases to call the present into account on its own terms rendering the present merely as an object of our interpretation, then it ceases to be eschatological. Eschatology is intrinsically transformative, not merely interpretive. The weight of importance is thrown upon the present by the hope inaugurated by assurance (or even experience) of a given and yet open future (i.e. the resurrection). 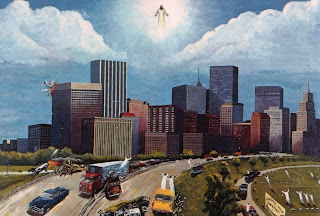 So when Tim LaHaye writes a novel about some theologically-loaded event that is to take place in the future, it does not follow that his project is eschatological.

If you want a place to look for eschatology in the Bible, some of the "classic" places, like Revelation or Daniel, are sometimes problematic places to start. My recommendation is that we start with the resurrection narratives in the gospels... but first we might have to start with 1 Corinthians 15. There, by distinguishing Jesus' resurrection as "first fruits" (v.20),  Paul is describing the inauguration of a future hope, even in the present. "...Thanks be to God! God gives us the victory through our Lord Jesus Christ" (v.57). The present is called into correspondence with the future, for the resurrection itself is in its essence an eschatological event, the "first fruits" of a future hope, a future event which has visited our present and had thus called present into account on the terms of hope.

Hope and eschatology, in these terms, is not present in the interpretative methodology of Premillennialism. The present is a waiting period, an anticipatory moment, emancipated from accountability to correspondence with the future. In other words, it does not name and oppose injustices in the present, in fact it's eerily comfortable with them so long as they fit into the chronological framework of apocalyptic destiny.

The problem then, is that rather than being called to action by way of anticipation, we are paralyzed by it - forced into passive indifference to the suffering and injustice which characterizes the anguish of our current situation. 'Eschatology' as such, gives eschatology in principle, a bad wrap. This kind of thinking is what makes people so suspicious about eschatology in the first place. Activist types are rightly critical of this approach because it deems their work an exercise in futility. I once heard John Piper suggest that the work for justice is merely the work of sending people to hell, "comfortable along the way." If this is an example of eschatology, then we would be right to jettison it from view. But, as I've suggested, such a perspective is wrong not because it is eschatological but precisely because it is void of eschatology - void because its vision for the present is not correspondent to the future. Another word for this is escapism. And eschatology, in biblical terms, is intrinsically anti-escapist.

Paul's exhortation in 1 Corinthians 15, if it were presented in escapist terms, should call us to hunker down and wait for the victory to finally come. We should expect it to end with a celebratory proclamation, "isn't it great how awesome heaven's gonna be!" But perhaps unexpectedly, it ends with a call to action. "...stand firm. Let nothing move you. Always give yourselves fully to the work of the Lord, because you know that your labor in the Lord is not in vain" (v.58). The future for which we hope, the Kingdom of God, is a future for which we strive and a future to which the present is to be held accountable precisely because it is a future of which the "first fruits" have already been experienced. As Jürgen Moltmann has written, "Jesus is recognized in the Easter appearances as what he really will be" (Theology of Hope, 85). By these standards, "Hope alone is to be called 'realistic', because it alone takes seriously the possebilities with which all reality is fraught" (Moltmann, 25). Eschatology doesn't paralyze us from demanding life instead of death in the present, it requires that we do so.

We can no longer be comfortable with the cynicism which is content to interpret injustice. Rather, we are compelled by eschatological hope to transform injustice, to reverse suffering, and to demand God's reign here and now because we have already tasted the fruit of the promised land in the resurrection of the crucified Christ.
Posted by wellis68 at 2/07/2013 01:15:00 PM

Email ThisBlogThis!Share to TwitterShare to FacebookShare to Pinterest
Labels: Moltmann