Pastors and Nonviolence: Taking Our Cues From Jesus

I have a few "friends" on Facebook with whom I have some deep-seated theological differences (don't pretend to be surprised). And there's nothing strange about that. Someone like me who spends a lot of time refining the particulars of their theological perspective is bound to find differences with people. Nothing wrong with it either. Differences are a good thing, since we're all just varying degrees of wrong (or right) in the end anyway. It's all about how you deal with difference and how you engage in dialogue. 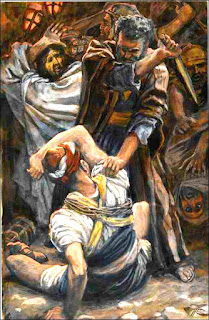 That being said, there are times when I find myself perplexed by some of the things these friends post and promote, particularly when they are pastors. I have had several pastor friends post about gun control lately (I guess everyone's thinking about that these days) and if all I'd ever read was the Gospels, it would seem obvious that these pastors should be advocating some kind of move in the direction of nonviolence. Jesus himself had a multitude of opportunities to use violent force and never took them - even when he was attacked and arrested. It was Jesus who first said, "...all those who take up the sword shall perish by the sword...," a phrase often quoted by nonviolence advocates around the world - even the ones who don't identify as Christians. Nonviolence advocates throughout history (and there's a rich history of them... read Nonviolence by Mark Kurlansky) who have suffered nonviolently and often successfully on the front lines of the cause for peace and justice have taken their cues from Jesus. And yet that's not what many of my pastor friends are saying! American pastors, many of whom live in comfortable homes, far from the threat of any real physical violence, are some of the loudest spokespeople for the accessibility of lethal weapons. It wouldn't be surprising if there were a few who represented some obscure theological interpretation of Jesus' teachings on the subject, but there aren't just a few - there's a large percentage of the leaders of the church in America who think that the use of guns is a legitimate way for people to "defend their families." After reading the New Testament, one must wonder, how can this be so? How can something that seems so obvious to the "casual" reader of Jesus' teachings, be so utterly marginalized by those who are supposed to be dedicated to them?

Perhaps pastors are too smart for their own good. Maybe they know too much about the gospel to take Jesus seriously on issues of social ethics. But that's the problem and that's what I suggest is at the heart of the matter...

Wherever pastors are getting their theological education, however they're training themselves to think about the gospel of Jesus, they've managed to relegate Jesus to the "spiritual dimension." Jesus came, they seem to think, so that people can go to heaven when they die. Sure, it'd be nice if they could learn to behave themselves in the meantime - Jesus wants us to be moral and all - but those teachings are more like suggestions when it comes down to the wire. The gospel doesn't determine our social ethics - necessity does, but Jesus' teachings might be helpful here and there. We've lost the concrete theological connection between what we're doing and why we're doing it - between the social ethics of Jesus and the Kingdom message he came to embody and proclaim. Loving your enemies has taken a backseat to "believing" and "professing" when, in reality according to the resurrection, loving your enemies is actually the foundation for belief and profession. There's not just a connection between Jesus social ethics and his saving work -  as if they're just helpful to one another - one actually feeds into the other in such a way that you can't have one without the other.

Jesus was known for his frustratingly uncompromising commitment to love. Perhaps we pastors should take our cues from Jesus, the way so many have throughout history.

"The matter is quite simple. The Bible is very easy to understand. But we Christians are a bunch of scheming swindlers. We pretend to be unable to understand it because we know very well that the minute we understand, we are obligated to act accordingly. Take any words in the New Testament and forget anything except pledging yourself to act accordingly. My God, you will say, if I do that my whole life will be ruined. How would I ever get on in the world? Herein lies the real place of Christian scholarship. Christian scholarship is the Church's prodigious invention to defend itself against the Bible, to ensure that we can continue to be good Christians without the Bible coming too close. Oh, priceless scholarship, what would we do without you? Dreadful it is to fall into the hands of the Living God. Yes, it is even dreadful to be alone with the New Testament." _Soren Kierkegaard