Is There Any Hope For Satan? 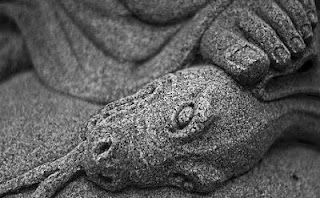 Ever since I first started translating Hebrew into English for biblical exegesis, I've been fascinated with a passage that's sometimes referred to as the Protevangelium--the first messianic prophesy in the Hebrew Bible.

In most English translations it's rendered, "he will crush your head, and you will strike his heel.” It shows up in Genesis 3:15 right after Adam and Eve decide to eat from the tree of the knowledge of good and evil. It's considered a messianic prophesy (an interpretation that goes back as far as Justin Martyr in the second century AD) because God is speaking it over the serpent, often interpreted as Satan (though the passage in Genesis predates such theology). Because Satan tempted the people, the interpretation goes, eventually the Messiah--Jesus--will come and end the struggle once and for all by finally vanquishing the adversary.

You may remember Mel Gibson's subtle reference to this in his movie The Passion of the Christ. Early in the film, while Jesus is praying in the garden prior to his arrest, he has a short and cryptic meeting with Satan, who sends a snake slithering towards him. Jesus stands up to his feet, looks at Satan as a boxer would stare down an opponent, and crushes the head of the serpent, foreshadowing the true nature of the business he's about to conduct... It's actually not that subtle if you're familiar with the Protevangelium interpretation.

This interpretation has been popular, probably since its origin. But there are a couple of problems with it... first, an exegetical one, then a theological one.

Interestingly enough, the words "crush" and "strike" are not distinct from each other in the original Hebrew. That is why the King James Version uses "bruise" in both places: "it shall bruise thy head, and thou shalt bruise his heel." The words which many modern translators have chosen suggest a presupposed theological interpretation. "Crush" implies destruction, "strike" does not. But without the presupposition of the Protevangelium,  there's nothing to necessitate a distinction in terms. Whatever is happening to the serpent's head is also happening to the heel of humanity.

The passage shows up in the context of a "curse"--a pronunciation of what has entered the world as a result of the taking of the forbidden fruit. There will be pain, there will be struggle, there will be war, etc. This curse is the poetic description of all that pains the world. It points forward toward exile, toward murder, even toward the flood that should have undone God's good creation. And it is exactly the curse which the Messiah was expected to undo, the curse which Jesus is proclaimed to have reversed through his work on the cross. But how is it that in this context, we select one passage in the midst of the curse to interpret as futuristic prophesy? As part of the curse, Genesis 3:15 should be seen as something to be corrected, not fulfilled. We should expect the Messiah to end the struggle between the serpent and humanity. The "crushing" and "striking" of which we read are part of what's wrong in the world--we have no reason to interpret one as such and the other as the means by which it is ended.

Isaiah 65 is possibly the clearest Old Testament example of the hope that the curse of Genesis 3 will one day be reversed, that things will be made right again, and the enmity between the serpent and humanity is not excluded.


"The wolf and the lamb will feed together, and the lion will eat straw like the ox, and dust will be the serpent’s food. They will neither harm nor destroy on all my holy mountain,” says the Lord." (Isaiah 65:25)

The theological question concerns the cross. Assuming we confess Jesus as Christ, do we believe the cross to be the means by which he accomplishes his work? Now, we should not take the reductionist stance of suppressing the importance of everything Jesus did prior to his death and resurrection (as perhaps has been the historical result the early Christian creeds). But should we not see Jesus' teachings, his kingdom announcements, and the signs and miracles he performed to embody it, as being consummated on Golgotha?  Should we not see everything Jesus did prior to his death as being summed-up on the cross? This is, I believe, the best theological picture of the cross. ‎"...people are healed not through Jesus' miracles, but through Jesus' wounds; that is, they are gathered into the indestructible love of God" (Jürgen Moltmann, The Way of Jesus Christ, 110).

If the cross is the means by which Jesus heals the world, then all violence and all vengeful coercion is called into question and even contradicted in Jesus. Crushing heads, as it turns out, is just not the way of Christ. Sacrifice, yes. Non-violence, yes. Vengeance, no.

This theological problem with the Protevangelim does not necessarily preclude it... but it certainly must add at least a layer of irony to the scene depicted in Gibson's film. It should definitely add a layer of irony to the language of "crushing" and "striking" should we choose to employ it in messianic expectation. The cross brings the end of the enmity, not by taking a side and stomping out the other, but by taking it upon himself, allowing it to do its worst, and making resurrection its end. The serpent, after all, turns out to be part of the creation which Christ has come to redeem.

It turns out, hope for salvation, on the basis of the cross of Christ, cannot even be denied to Satan--the great adversary of God and humanity. The Protevangelium needs revision if it suggests otherwise. There's nothing and no one that God cannot save through means of grace.