How do you really pay tribute to Martin?

"I believe that unarmed truth and unconditional love will have the final word in reality. That is why right, temporarily defeated, is stronger than evil triumphant." –Martin Luther King Jr. 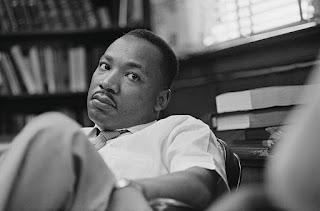 One lesson that can be taken from history is that radical revolutionaries, once canonized or sainted, are ironically easier to ignore. They still get famous (extravagantly more famous) and everyone knows their name, but the name changes once they receive a stamp of approval from such high authorities - often, the same authorities they protested in life and sought to revolutionize in history. They tend to lose their revolutionary and especially their radical quality. Two factors contribute to this.

1) When someone is canonized or given their own holiday, their example becomes inaccessible to the general population. They're no longer one of us regular folks, so their values and standards contribute less to what we expect from ourselves and more to what we may see as a respectable yet unattainable ideal. We take transferable 'believe-in-yourself' principals from their example, but we often don't put much thought into what it would look like for us to take their life and legacy as prophetic challenges to the status quo.
2) When someone is canonized, a claim is made over them. Their voice becomes the possession of the powers and systems which exalt them. When someone receives the stamp of approval from the very powers and systems they came to dismantle or transform, we cannot hear their message of opposition because it comes to us from those very powers. By the time their voice reaches our ears, it has been absorbed into the voice of power. The State doesn't know what to do with radicals, but they know what to do with saints.

Today is the holiday dedicated to Martin Luther King Jr. - a radical revolutionary who spoke out with courage and boldness against the powers which promote inequality, poverty, racism, violence, and oppression. Today, he'll be celebrated by those very powers. So what does it actually mean to pay tribute to Martin? First, I suggest, we should take him off the pedestal and begin to see him in his own light rather than the American spotlight. 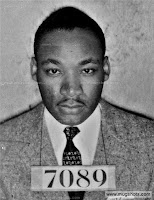 In his own light, Martin was a revolutionary. He was a man with faults, a man with struggles, a man whose example of prophetic witness is accessible to us. He was a pastor, guided step-by-step by the example of Jesus Christ. Racism was just a piece of the tragic puzzle he called into question. He spoke out against economic inequality. He spoke out against militarism. He spoke out against violence. And yet on this day he will be celebrated by a State which still sports historic levels of economic inequality, still wages war against its enemies, and still annually increases its military budget. He was famous for saying, "A nation that continues year after year to spend more money on military defense than on programs of social uplift is approaching spiritual doom." Today he will be celebrated by many who actually think he was full of it! Oh, and by the way, racism is definitely not a thing of the past. The American State still legislates racism and still justifies discrimination and social injustice. Will all the irony be lost on us?

To truly celebrate Martin Luther King Jr. we must, at the very least, try to hear him in his own voice and consider the dangerous possibility of actually standing for the things for which he stood. We need to hear his voice, not as the domesticated voice of an "American hero," but as a prophet for justice, an activist for nonviolence, martyred by the systems he came to oppose. His life was a dangerous life, a threat to power, speaking truth to power.

And I would suggest that the only real way for us to follow Martin's example will be to follow the example he followed - to take the dangerous steps of Christian discipleship and to actually follow Jesus, to be about the things that Jesus was about. In the end, Dr. King's legacy is the legacy of one who took up his cross and followed Christ into hell for the healing of the world.

May we be radicals! May the State have no idea what to do with us! May we pay tribute to Martin by being about what he was about.  And may we be passionate and uncompromising in our dedication to Christ and the reign of God in the world.

"Somehow we must be able to stand up against our most bitter opponents and say: We shall match your capacity to inflict suffering by our capacity to endure suffering. We will meet your physical force with soul force. Do to us what you will and we will still love you.... But be assured that we'll wear you down by our capacity to suffer, and one day we will win our freedom. We will not only win freedom for ourselves; we will appeal to your heart and conscience that we will win you in the process, and our victory will be a double victory." Martin Luther King Jr., A Christmas Sermon for Peace on Dec 24, 1967