I have friends on both sides of the argument concerning the moral legitimacy of homosexual relationships... and that is why I still begin posts on homosexuality with disclaimers such as this, though I am honestly tired of doing it. I know that the debate is still ongoing and that conservative Christians aren't hateful people, but I am proud to consider myself an ally to the LGBT community. 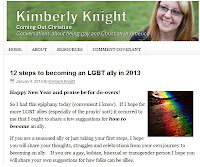 That being said, I would like to invite you to be an ally as well...

I would write my own suggestions about how you might begin, but Kimberly Knight over at Coming Out Christian has written a great post called "12 steps to becoming an LGBT ally in 2013" in which she says it better than I could myself.

These 12 steps are good suggestions for any kind of advocacy, even any kind of relationship, it's just good ministry. I encourage you to check them out and consider them, no matter what "side" you might be on. Check them out--especially the good reading list on step 7!
Posted by wellis68 at 1/06/2013 01:14:00 PM