A Tale of the Rejection of Rejection 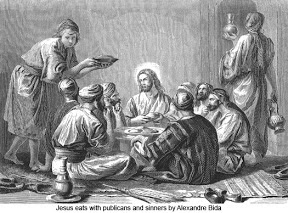 And Jesus said to the Pharisees and to the teachers of the law, "I would rather go to hell with the prostitutes and tax collectors than go to heaven with a God who'd reject them." So they gave him his wish. They had him arrested, tortured, and publicly executed by the Roman authorities. They hung him on a cross as a public display, to show what happens when you cross the religious and political authorities, when you reject the systems of rejection and embrace the wrong kinds of people. But their plan backfired.

They soon realized that the one they hung on that cross was the son of God, the only authority to which humankind must answer. They saw that their rejection of certain people, according to their religious and political expectations, put them at odds with the God they thought might serve them, the God they had been so sure had stood on their side. And when the crucified Jesus stepped out, with air in his lungs, from the grave they thought would hold him--when he rose from the hell into which they sent him--they discovered that there was no God in their heaven.

They'd crucified their God with thieves and terrorists. They crucified their God in rejection of sinners. What was actually on display, in that body on a cross, was the end of the little world they'd fought so hard to create and the inauguration of a new world--a world without borders, without rejection, where first are last and last are first, where there is no male or female, Jew or Gentile, for we are all one in the crucified Christ. If they'd known what they were doing, they may not have done it. For the death and resurrection of the man from Nazareth was the annunciation of hope in the deepest and darkest hell. It was good news to the poor, liberation to captives, sight to the blind, and freedom to the oppressed.

When the Pharisees and the teachers of the law saw what they had done, they trembled... when the prostitutes and tax collectors saw what had happened, they rejoiced.
Posted by wellis68 at 12/14/2012 12:20:00 PM