Youth Ministry at the Cross

I just completed the first draft of a paper on which I've been working for my class on Youth Ministry here at Princeton. The basic structure of the paper is to examine the distinctive issues of contemporary adolescence, specifically the crisis of "systemic abandonment" (Chap Clark & Amy Jacober), in light of the foundational Christian doctrine of the atonement. I specifically use Jurgen Moltmann's Christology, with some help from James Cone and Jon Sobrino, to explain the atonement not merely as a "penal" substitution of Christ for human sin in the service of justification, but as God's solidarity (I was tempted to use the term Koinonia, but that would've taken up too much space) with victims of suffering, injustice, and abandonment. I talk about the need for Youth Ministry to embrace grief and to elevate honesty and doubt over against success and "spirituality." 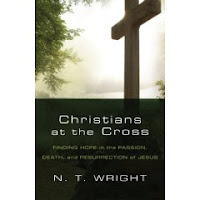 Drawing from N.T. Wright's discussion in Christians at the Cross, I suggest that "Youth Ministries need to be safe places for adolescents to bring their sorrow and their sense of abandonment within the story of God’s abandonment and allow them to be held there so that they may be 'possessed by a hope' (Moltmann)."

Here's one of the more important paragraphs from my paper, I think (remember, it's the first draft):


The decisive thing which happened on the cross was that the God of resurrection suffered with humanity, became a victim with them and their companion in abandonment. If a distinguishing factor of contemporary adolescence is the tragedy of systemic abandonment, then it is the task of the Youth Worker to make the concrete connections between God’s suffering and the suffering of the adolescents to which they are ministering. If the cross is “Christian faith in microcosm” (quoting Gabriel Fackre) and if atonement through divine solidarity and affirmation (Moltmann) is what Christ accomplished before he said, “as the Father sent me, now I am sending you” (John 20:21), then Youth Ministries must be marked by the cross in their methodology and strategy. Only cross-shaped Youth Ministry can respond in the way of Jesus Christ to the crisis of the systemic abandonment of adolescents. For the way which Christ has chosen to respond to the abandonment of humanity— abandonment of one by another and apparent abandonment of humanity by God—is through the cross; to declare with his body God’s affirmative and redemptive presence in the midst of suffering and isolation.