The Problem with Materialism... 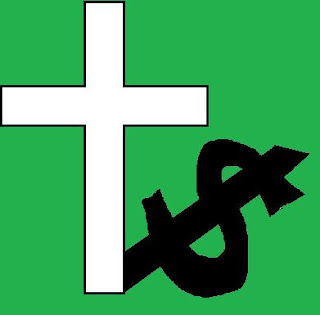 At its most basic philosophical level, it is often said that the problem with materialism is that it can deny the existence of things that are not experienced in the physical world. If materialism asserts that whatever is behind the scenes (i.e. love, spirituality, mystery, etc.) is merely the result of material interactions then there's definitely a problem ("merely" being the operative word here). Philosophical materialism is usually seen as a problem because the very existence of God is at stake.

But with presupposed complexity, I actually don't have a huge problem with philosophical materialism. My understanding of love does not have to be totally undermined by material explanations for its existence. Indeed, the New Testament makes the claim that God is love while, absurdly, making the simultaneous claim that this God, this love, can be known and experienced through the incarnation. The God who is Love, as it turns out, is as material and as particular as a man from Nazareth named Jesus. The incarnation is a mystery so it shouldn't come as a surprise that there're some paradoxical elements involved.

The truth is, Christianity itself is essentially materialistic, not to suggest that it denies the existence of spiritual or metaphysical realities, but insofar as its most distinctive claim is that God assumes physical existence in order to save physical creation from its undoing. "The Word became flesh..." is more than just an anecdote about Jesus' divinity, it's a theological proclamation about the divine value of the most primitive material components of reality. God in Jesus is the divine living, breathing, eating, drinking, sleeping, sweating, and diggin-in-the-dirt in all the stuff of human existence. "We are living in a material world..." said Madona, and the Christian can, with joy, affirm the same. Christianity is the elevation and affirmation of the material world, with faith in a crucified God and hope that whatever God assumes into God's own experience (i.e. material existence) can be redeemed and saved.

But "redeemed," here, is the operative word.

Incarnation and atonement are about the redemption of the material world--liberating it from all the things of death and decay, albeit through God's experience of and victory over death and decay, making the world that is to come (call it heaven) mysteriously different from the world as we know it. As such, it implies a proper relationship to the material world with a proper sense of its sacredness, of God's value for it. And here is where we come to the real problem of materialism.

The real problem is not in human value for material existence--that part is good. The real problem is when such value becomes distorted. The greatest example of this distortion is in the human worship of accumulation. Isn't that what we mean when we talk about materialism in the social setting? Materialism can, and often does, become consumeristic. When we become attracted to the next big thing, when we become obsessed with getting stuff in the service of our own comfort, our own social status, our own pleasure, we begin to elevate the material world over the God who gives it its value in the first place. When objects become merely objects, for the service of the self, that's when materialism becomes a vice, a sin even.

You see, in Christian circles, the sin of materialism is often defined as idolatry, the worship of stuff in the place of God. There's certainly truth to this. However, if we really worshiped stuff, we'd hardly be so possessive of it. We wouldn't try to conquer that which has divine value for us. If we really loved things, we wouldn't objectify them. No, the fact is, the worship of things is not the heart of materialism. The heart of the matter is what those things are actually for, who they're for, and what they're all about. The sin of materialism is the worship of self in the place of God. Things are not objects in service of the worship of God as they should be--that is the proper relationship, that is the redemption of the material world--they become objects in the service of our own conquest. The material that God has made, that God loves, and that God will restore is reduced to mere material and we take God's place at center stage. So we collect, we conquer, we possess, and we shop for the next big thing so that we can serve ourselves, so that we can have status, comfort, and superiority. The sin of materialism is that things become ours instead of God's--they're for us and about us.

In proper relationship, things are for God and about God. As such, things are also about justice and the affirmation of humanity, since that's what God has chosen to be about. That's the materialism of the gospel--God is for the world in Christ because the world is for God from the beginning.  And that is what makes things so sacred.