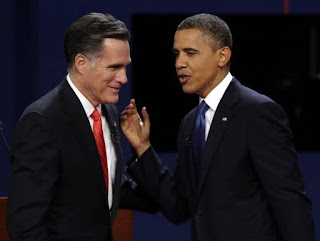 Today there's an election happening in the United States to decide who will be the country's President from 2012-2016. Hundreds of millions of dollars have been spent by each candidate, even while many of the people they say they're going to serve are hungry, without health care, living in fear of deportation, and wondering where they might spend the night tonight. I always wonder how many might be helped if we could take just a portion of the hundreds of millions of dollars spent on campaigns and put it toward... I don't know... maybe helping the people from whom candidates are trying to get votes (or perhaps the ones who can't vote at all). What if we just capped the campaign spending at, let's say, 10 million dollars per candidate (even though, I think that they could do with much, much less)? And what if the same donations which might have been given for political ads were given instead to organizations that are working compassionately for the sake of those on the under-side of society? What if the same frenzied energy that's put into campaigning and making sure the right guy wins was channeled toward forgiving third-world debt or making sure people have access to education and clean water?

There's definitely something wrong in American politics, and the problem is not just in the machine itself; it's in us. The problem is with the consumer. Candidates are just doing what they think they need to do to get votes (let's go ahead and assume that).  What if we demanded that they work not just to meet our needs, but the needs of those who are too often left out of the conversation? (how many ads have you heard that are directly addressing third-world poverty or even American homelessness? I have heard NONE.) If we who have the means to give and the energy to support, would only re-orient ourselves away from self-preservation and self-interest and toward the marginalized and the poor (whom, by the way, the political system has effectively slandered and dehumanized to the point where we can't even agree that we should be helping them), then perhaps the system would conform to us and ultimately to its poorest people and to the world's poorest people. It is the people who lead the nations to peace, not the other way around. So we, the people, should place our trust not in politicians but in the God who sides with the least and the last... and then we should refuse to settle for anything less than the kingdom of God--we should speak truth to power and demand that those who have the power to execute justice, execute it on behalf of those who hunger and thirst for it.

On another note... whatever happens tonight, it's certain that half of the country will be disappointed. Division doesn't help anyone! Let us respond to one another, not with malice, anger, or condemnation but with grace, love, and ultimately hope--hope that we can share in community with one another and that we might put differences aside to be the people that God has called us to be.
Posted by wellis68 at 11/06/2012 01:58:00 PM