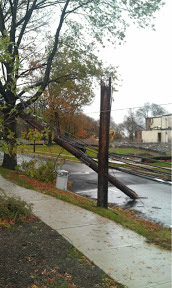 In case you hadn't heard, a pretty large storm came through our part of the country last week. Hurricane Sandy swept through the North East causing flooding and destruction along the way. Here in Princeton, New Jersey, the flooding was not a big issue, but the wind definitely was. As my wife, some of our friends, and I sat in our apartment playing card games, listening to the wind as it took down trees in front of our complex, we knew it was just a matter of time before a fallen tree would knock out our power. At about 8:30pm October 30th, a large and healthy tree finally went down right onto the power lines in front of my apartment, snapping telephone poles in half and taking out the power in the complex and in some of the surrounding buildings. This was the story all over Princeton, but while most of Princeton has been restored, our trees were so entangled with power lines that they've still yet to finish the job. They're saying we might not have our power back until Thursday.

Luckily for us, the brand spanking new apartments in which we live have a generator which provides power to the community lounges and study rooms, and apparently to the hot water source (and I'm sure that the Seminary is spending lots of pennies to keep the generator running).

The byproduct of this inconvenience is that our little community has come together, closer than we would have had there not been a power outage. We've helped each other out by sharing food with one another and much needed fellowship. I have to say, the blessings we've received have outweighed the curses of this storm.

We know that we are privileged by the situation in which we find ourselves. And we are praying for those who've found themselves in a much darker place due to the storm. While this has been merely an inconvenience to us, it has been nothing short of a crisis for others.
Posted by wellis68 at 11/04/2012 08:45:00 AM

Glad to hear you're well and safe!

Glad to read that your well. i just happened on your blog looking for a blog about living the kingdom life. Is this sharing food part of the Kingdom living?