Why Adam Doesn't Have To Be Real But Jesus Does 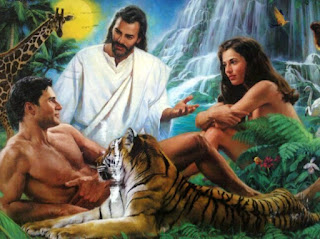 The concept of a literally historical Adam and Eve is absurd to many, if not most people--even people who believe the Bible to be divinely revelatory and authoritative. I count myself as one of those. I believed in an historical Adam and Eve when I was young, but when I learned to read the Bible contextually and with literary responsibility as well as theological faithfulness (something, I should say, that I am still learning), I quickly realized that truth is not the same as literal factuality. I learned that some things in the Bible, of which the Adam and Eve narrative is a good example, are not meant to be understood as literally factual--though they're certainly grounded in reality, the historicity of such narratives is incidental to their truth.

But is Jesus in the same category? I would argue that he's not. Whatever symbolism is present in the Gospels, the incarnation must itself be reality, it must be historical. If Jesus' work was merely symbolic of some condition of human standing before God, then the implications are detrimental to the concrete connections of the cross and human suffering. For humanity to have been redeemed, Jesus has to have been human. For “what has not been assumed has not been healed; it is what is united to his divinity that is saved. . .” (Gregory of Nazianzus, Epistle 101).

Some have argued, and their concern is invested, that Jesus can only be as real as Adam--if Adam was symbolic, then so was Jesus. They want to affirm a historical Adam so that they can affirm an historical Jesus. I don't think that this is a necessary concern. They're right about one thing... the reality of Jesus is deeply dependent upon the reality of human brokenness, and the accursedness of creation because of sin and death. That is, after all, what Adam's story is all about. It's the story of what is actually true about creation--that God made all things "good" and that human beings are bearers of the image of God--and of dehumanization, disobedience... call it what you will... bringing an unwelcome guest, a curse which does not belong and should not exist, onto the scene. The truth of what Adam's story is about is not dependant upon the literal historicity of a man named Adam and a woman named Eve. Adam is a lens for understanding, in the midst of accursedness, the original integrity of creation and the problem which calls for a solution (spoiler alert: Jesus is the solution).

We have a very different way of talking about Jesus Christ. His story is categorically distinct from that of Adam and Eve. Besides that fact that there is verifiable evidence that Jesus was an historical human being, quite literally grounded in reality, what's essential to Jesus' story is his humanity and the particularity of his redeeming presence within history. Christ is God uniquely entering into the world and into the curse of sin which invaded the good world. Jesus' story must be grounded in history in a way that is different from how Adam's story is grounded in reality. In Jesus, God is redeeming and affirming the integrity of creation within the concrete reality for which Adam's story only provides a lens. Christ, as such, must be historical, for God's humanity and historicity in Jesus of Nazareth (again, even if there are symbolic elements in the Gospel narratives) is essential to the solution for sin and death--the solution being a wholesale reversal of Adam's curse. While Adam's literal historicity, as anything more than an analogical interpretative lens for an historical truth, is incidental; Jesus assumes history and thus redeems history in all its corporeal glory.
Posted by wellis68 at 10/16/2012 02:28:00 PM