The Real Life Cross: A Glance at "The Cross And The Lynching Tree" 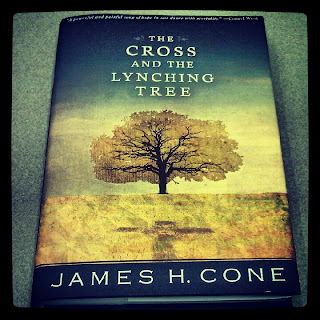 If you've never read James Cone, you should.

Today I finished reading The Cross And The Lynching Tree by James Cone and I think it provides a timely critique not only of its obvious focal point of systemic racism but on the over-spiritualized, depravity-oriented soteriologies of conservative evangelicalism. Cone's discussion has profound implications on the atonement and the doctrine of sin in Christian theology. By allowing the cross of Christ and the lynching tree of white supremacy to be inter-interpretive, Cone sees the cross not only as a means for the atonement and forgiveness of sin, but as the place of God's solidarity with flesh-and-blood crucified people--"the least of these." As such, the cross provides salvation not only from spiritual and ethereal realities of sin and death, but from actual systemic dehumanization and oppression. In other words, the cross is not only relevant to the eternal destination of the soul but to the immediate and historical realities of racism, oppression, and violence.

Cone's call is for us to stop speaking in obscurities and abstractions about the cross of Christ and to start seeing it in its most tragic forms even as they stand before our faces in real time so that we might share in Christ's sufferings and join in the fight for human dignity and justice.

This book deserves more than this quick glance, but lemme just share some good quotes:


"To forget this atrocity [lynching] leaves us with a fraudulent perspective of this society and of the meaning of the Christian gospel for this nation." (xiv)

"The cross is a paradoxical religious symbol because it inverts the world's value system with the news that hope comes by way of defeat, that suffering and death do not have the last word, that the last shall be first and the first last." (2)

"Christ crucified manifested God's loving and liberating presence in the contradictions of black life--that transcendent presence in the lives of black Christians that empowered them to believe that ultimately, in God's eschatological future, they would not be defeated by the 'troubles of this world,' no matter how great and painful their suffering." (2)

"If the God of Jesus' cross is found among the least, the crucified people of the world, then God is also found among those lynched in American history." (23)

"One has to be a little mad, kind of crazy, to find salvation in the cross, victory in defeat, and life in death." (25)

"The crucifixion of Jesus by the Romans in Jerusalem and the lynching of blacks by whites in the United States are so amazingly similar that one wonders what blocks American Christian imagination from seeing the connection." (31)

"The will-to-survive is so strong that it transmutes easily into the will-to-power." (40)

"...personal suffering challenges faith, but social suffering, which comes from human hate, challenges it even more. White supremacy tears faith to pieces and turns the heart away from God." (153)

"Without concrete signs of divine presence in the lives of the poor, the gospel becomes simply an opiate; rather than liberating the powerless from humiliation and suffering, the gospel becomes a drug that helps them adjust to this world by looking for 'pie in the sky.'" (155)

"The cross is the most empowering symbol of God's loving solidarity with the 'least of these,' the unwanted in society who suffer daily from great injustices. Christians must face the cross as the terrible tragedy it was and discover in it, through faith and repentance, the liberating joy of eternal salvation." (156)


...And there's more where that came from. I really commend this book to you as an important contribution to the conversation not only concerning systemic evil and racism, but concerning sin and atonement.
Posted by wellis68 at 10/22/2012 10:51:00 PM