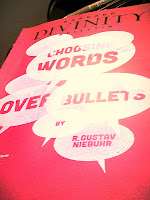 Last week I started working in the PTS Mail Room--a somewhat refreshing shift from being a Youth Ministry Director in Ramona. Mindless labor can be therapeutic. Occasionally, the Seminary still gets mail addressed to students who no longer attend the school (for example, I found an APU Life magazine addressed to my friend Christine Shander last week!). In such cases we can forward the mail if it's shipped first class, otherwise we discard it... Well, sometimes I like to read other people's mail if it's in the form of a magazine with interesting content. Today, some ex-seminarian received the Harvard Divinity Bulletin... so I read it....

In the cover article, "Choosing Words Over Bullets," R. Gustav Niebuhr writes about the challenge of interfaith dialogue and the need for people to graciously learn about one another for the construction (or maintenance) of civil society in the face of the "ogres" of violence and intolerance. There was one quote in particular which I found worth sharing. Niebuhr writes,


"Every person is a text to be read. And the reading imparts an experience that adds a dimension to labels we might otherwise be tempted to dismiss. And then there is a writing that we ourselves do. What continually amazes me is how the writing from those who seem to be the weakest, in the most vulnerable situations, endures to move us and inspire us years and years later. The opposite is so often true of those who wield power brutally."

There's two parts to this quote, really. The first part is that "Every person is a text to be read." Earlier he talks about his fortunate inability to lump people into broad categories and apply wholesale assumptions thereupon. I strive for the same posture. I often find myself defending one side or the other depending on what's being said about them. For example, though I myself have many critiques for conservative evangelicals, I find myself defending their motives and even their positions to my more "liberal" friends and colleagues. Likewise, I tend to defend the liberals to my conservative friends. The fact is, people are too gloriously complex to be stereotyped. As my former professor, Dr. Dennis Ockholm used to say, "labels are training wheels for the mind." Eventually we've got to take the training wheels off and read people for who they are, not for those categories into which we've placed them.

The second part of the quote concerns the "writing" we do--the impression we press upon others and the effect we have on them. Though we often are encouraged to emulate the rugged individualism and coercive entrepreneurial spirit of the rich and powerful, the people who tend to inspire us are those who do just the opposite, those who speak from a position of solidarity with the poor and the marginalized. Niebuhr mentions Dorothy Day and Martin Luther King, Jr. as examples and he points out that those who "wield power brutally" tend to leave a more brief and even simplistic legacy. By way of example, Niebuhr points out that few really remember what Osama Bin Laden actually said. His legacy was brutal and simplistic. So the question is, I guess, are we "writing" in such a way as to inspire compassion and love or are we writing a story of coercion and fear?

Niebuhr closes his article by referring to a quote from the philosopher Albert Camus: "'[W]hat we must fight is fear and silence and the spiritual isolation they involve.' What we must defend, he said, is dialogue and universal communication among all people."

Hmmm...how come I haven't received my Harvard Divinity Bulletin yet? Now you've made me look forward to it! Thanks, Wes!

I am commenting on this.