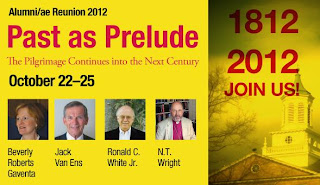 This week is Reading Week (which is by no means a break), the PTS Bicentennial celebration, and the Alumni/ae Reunion--so needless to say, it's a busy week here at Princeton. And while I'd normally be inclined to use every moment that I'm not studying as an opportunity to be lazy, I couldn't pass on the opportunity to see N.T. Wright speak on the gospels and the Kingdom of God (it was Wright, after all, who inspired the name of this blog). Over the next couple days, Wright will be here on campus giving lectures, the first of which was this morning at Nassau Presbyterian Church. It was essentially on how the Western church has misunderstood what the gospels (Matthew, Mark, Luke, and John) are all about by over-emphasizing the divinity question (i.e. the question of if and how we can speak of Jesus as the object of worship) and the atonement question--the questions with which the creeds of the church are primarily concerned--to the detriment of everything in between Jesus' birth and death, the narrative of "how God became king." 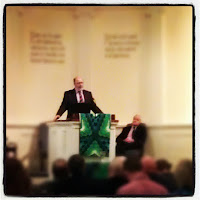 At one point Wright said, "The gospels were all about God becoming king, the creeds were all about Jesus being God," implying as he'd said earlier that, "faced with a choice between creed and canon the church has unhesitatingly favored the creed."  He went on to say, "the divinity of Jesus is the key in which the tune of the gospels is written, but not the tune that they are playing." So it's not that Jesus divinity isn't true or relevant. It's just that they're not what the narrative of the gospel is really all about. The gospels are about a Kingdom inaugurating action played out in the life of Jesus and not only in his advent, death, and resurrection. "Jesus was talking about God, precisely to explain what he himself was doing." There's a reason that the gospels spend so much time talking about stuff between the manger and the cross and it has to do not only with background information. "The gospels seem to be doing much more than simply providing that helpful historical background [to the gospel of the creeds]." The gospels are about the stuff between because the gospel is about God's reign in this world. "God really has become king in and through Jesus... if that is so, then nobody can stay indifferent."

It was strangely and ironically nostalgic, listening to N.T. Wright. It's been a while since I've heard him in person. ...Ironic because, in a way, it felt familiar like a piece of home, even though Wright is by no means local to California.