Creation: a doctrine of freedom and dependence

In other words, creation is completely dependent upon God but God is not dependent at all upon creation. Without God, creation ceases. Without creation, God is still God. But my problem is that I think we need a more robust--call it "relational"--understanding of the word 'dependant.'

Dependence is not just one thing and we can't go on talking as if it is. For example, there is a sense that I am myself without my wife. It's true, I'd be Wes even if I didn't have Amanda--even if I'd never met her. I am not dependent upon her...
But aren't I? If I had never met Amanda, sure, I'd be Wes, but what sort of Wes would I be? Certainly I'd be a different sort or version of Wes. That's because I am in koinonia (relationship of shared identity, reciprocity, love) with Amanda. I am shaped by my experience in relationship. The self I am with her is different from the self I'd be without her.

Turn this toward the doctrine of creation. I would agree with traditional theists that God is independent insofar as God is God with or without us and, not confusing God for a creature, God is free in God's own identity and agency. This freedom, call it sovereignty, is what gives God capacity for the action of grace that is the act of creation. Creation is a product of grace--in God's freedom, out of God's love, God graces the world with existence but not arbitrarily. Again and again in scripture, God is shown to be a God who enters into koinonia with God's creation. A traditional theist would not contest this assertion--indeed God's gracious turn toward creation is a crown of the doctrine of creation. However, they'd want to assert a kind of koinonia which keeps God safe from being affected by that with which God enters into relationship. But what kind of koinonia is without reciprocity, without identity sharing (if only in a sense), without interdependence? It's certainly not the reciprocity of Jesus' relationship with those he came to save.

Jesus said to his disciples, "I no longer call you servants, because a servant does not know his master’s business. Instead, I have called you friends, for everything that I learned from my Father I have made known to you" (John 15:15). There is reciprocity in this and yet, to make such an assertion of interdependence Jesus doesn't have to give up freedom (again, call it sovereignty). Immediately following, Jesus reminds his disciples, "You did not choose me, but I chose you and appointed you so that you might go and bear fruit..." Here there is a weaving together of grace and koinonia. Jesus reciprocates with his disciples. He calls them his friends and shares his identity with them and yet he maintains his own independence (which is a multifaceted sort of thing). 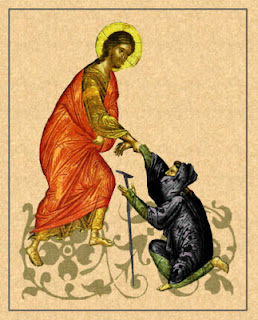 Christ would be Christ without the poor, without "the least of these" (Matthew 25) ...in this way he is independent. But what sort of Christ would he have been had he not shared his identity with the poor or with crucified people?! The fact is, Jesus did share his identity with "the least of these" (i.e. with creation). In this way Jesus was dependent upon people. Incarnationally, Jesus was shaped by experience--perhaps in a way that was different from any shaping we've ever known, but nevertheless, Jesus was shaped in his own identity by the very people whom he created (Col. 1:16). He shared meals with sinners, touched lepers, and fellowshiped with those on the under-side of society. Koinonia, in light of Jesus, implies a dependence like that which I have upon my wife.

Koinonia is reciprocity, even interdependence! Grace is freedom, even sovereignty! Creation is an act of grace, for the purpose of koinonia.