Christianity Without Religion: A Review of "Selling Water by the River" by Shane Hipps 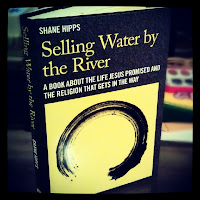 Shane Hipps is one of my favorite preachers and teachers of the bible and his previous works, especially Flickering Pixels, have been profoundly formative for me in my own theological reflection. So naturally, once I heard that he had a new book out, I ordered it. Selling Water by the River showed up in my mailbox yesterday and I promptly read it.

What Shane's trying to get at here is the accessibility of God and the immanence of God's reign, some things of which the church is in great need. I like where Shane's going but I'm not sure I'm on all the way on board with the path he takes to get there. Shane says, "Ironically, the religion that proclaims Jesus sometimes builds the biggest barriers to him" (p.6). Great statement. Sometimes this is true. And just when you might think he's only out to criticize one part of the church, perhaps just the conservative evangelicals or the old-school mainline churches, he says, "I am referring to Christianity as a whole, which serves as a gatekeeper for something that does not have or even need a gate" (p.6). His harsh criticism against what he calls "religious Christianity" is pretty pervasive throughout. The presupposition is that there is a Christianity which transcends religion, which gets to the river of God through non-religious means. And although he claims that he's not just saying that we should be "spiritual but not religious," his described alternative to religion remains somewhat ambiguous. Implicitly, Shane adopts a pretty rigid definition of religion. Things like prayer and worship are not what he's talking about. I imagine that even Baptism and Eucharist are somehow, if experienced with depth, outside the definition of religion. For Shane, authentic experiences (and he holds experience to be authoritative) of God, are not religious experiences--at least, they're not what religion is all about. Shane wants to talk about a religiosity--I'm not sure what else to call it--that's neither merely spiritual or merely religious. His reflection of authentic Christianity is a sort of apophatic existence, a way of being in negative space, neither this nor that.

In the same way that Hipps creates a dichotomy between Christianity and religion, to get into this sort of a-religious Christianity, he creates a similar dichotomy between knowing and belief. He helps us understand the dichotomy by explaining that, "if believing is the map, then knowing is the territory" (p.51). And religions, by the way, "are master purveyors of maps" (p.49). Now, knowledge is a tricky thing. What kind of knowledge is he talking about? Is it about objective certainty?  I don't think so. He's talking about trust, about a kind of gut-knowledge. And What kind of belief is he talking about? Implicitly, he's talking about a cognitive belief, a logical mental ascent to a propositional doctrine or concept. Herein lies the hierarchy of Shane's epistemology; experience is less fallible that logic, and is more trustworthy. I'm not sure I totally agree with this hierarchy, but that's how he navigates this transition from rigid theological dogmatism to real and authentic spirituality (though he probably doesn't want to use that word).  He says, "[Jesus] wants people to experience God's love, rather than just think rightly about it." This is profoundly true and vitally important, but I don't think that we need to jettison belief into the realm of purely cognitive thought, I think that belief and even disciplined theological reflection can be though of as part of the experience of God, even if it means at times commanding our deeply felt experiential presuppositions into subordination to logical clarity.

I don't think we need to think of religion and belief in such negative terms. Even if the establishment of the religious institution is not what Christianity is about, certainly our experiences with God in the contexts of community and solitude can be thought of as religious--of an authentically holistic kind of religion. It's misleading and it might even be arrogant, in light of hundreds of years of church history, for us to come on the scene today and say, "religion, I have no need of you," as though we somehow exist outside of religion. I think that at its worst, this dichotomy between religion and Christianity on which Hipps builds his argument is a cop-out so that we don't have to fess up to the dark parts of the history of Christianity.

I think that what Shane Hipps is trying to do is commendable. He's trying to articulate the true heart of Christianity. It's not about Christendom (which may have been a helpful term in place of "religion" in this book), it's not about correct thinking. It's about being human and experiencing God in the way of Jesus. I think that overall, the criticisms I have of Shane's book should not take away from the heart of his objective. I think this book will help a lot of people see the truth that Jesus is not confined in four walls of the church, that the negative experiences that they may have had with the church are not indicative of the character of Jesus, and that what we need the most is already here--accessible and immanent. "One of the most overlooked messages of the kingdom is that we already have what we seek. There is nothing standing between us and the river we long to find" (p.135). The love of God precedes anything we do to receive it. We can't earn it or find it in an institution, it's within us, it's the reign of Christ here and now.


"Jesus did not come to start a new religion or a new social order. He didn't come that we would become more religious or even more spiritual. Jesus came to show us what it truly means to be human--to live life conscious of the exquisite gift we've been given. He came to introduce us to the most easily forgotten and often overlooked miracle of all--our existence and the heaven hidden within it" (p.208).

Shane Hipps has joined a great tradition of prophetic critics of established Christianity, folks throughout history who have, in their given contexts, called the church to authentic consistency of life and Biblical spirituality--folks like John Wesley and Philip Jacob Spener. And though it's highly unlikely that his work will carry the same historical weight as some of those who've preceded him, this book is important and worth a read!
Posted by wellis68 at 10/13/2012 03:34:00 PM

Good review! And now there's another book to add to the growing pile on my desk....

Glad I can contribute to the pile. Add Flickering Pixels to the list while you're at it.

I already read that one, thanks to one of your posts. Keep the recommendations coming!

Ah, yeah. Forgot. :) You can always count on me for recommendations.

Dude, How on earth do you have time to read non-seminary stuff as a Junior at PTS? You must be more brilliant than I realized! (Well done at hiding it.) Hope you are well my friend!