Where Is The Truly Progressive-Evangelical Church?

What do I mean by progressive? Now, I don't mean Rob Bell... I don't consider him to be progressive in the same way (otherwise, I imagine that Bell's church would fit the description). And I don't just mean churches that let women talk. I laugh a little bit in my head when my evangelical friends say something like, "I'm kinda liberal... I think women should be allowed to be ordained," as though the ordination of women should still be seen as a controversial topic, as if they're being controversial. I'm glad they want women to be ordained, but that just says they're not a fundamentalist, it doesn't say that they're progressive or liberal. What I'm talking about is a church which encourages the ordination of anyone who receives a call from God including (if not especially) gay people. I'm talking about a church which allows for ambiguity in those areas in which our knowledge is especially provisional (i.e. eschatology and soteriology), a church which is socially active, politically involved, and oriented toward the poor and marginalized. I'm talking about a church that is careful in its language about God (not always assuming that God is masculine or American), unafraid of using the word "justice" in its liturgy (not just "righteousness"), straightforward about God's call to non-violence and ecumenism. I'm talking about a church with a truly historical soteriology, a church which believes that God's work of restoration is universal in scope... that God wants to restore creation, not just souls. And I'm talking about a church that does all this without losing its theologically Christocentric identity--that of being image-bearing disciples of Jesus Christ and agents of God's particular and peculiar reign in the world here and now. There are churches which are progressive (although many of then struggle to keep their biblical and Christocentric grounding) but are any of those churches also evangelical? 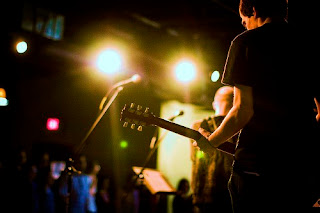 What do I mean by evangelical? I don't mean conservative... Although, too often, the terms are synonymous with one another. Evangelical, theologically speaking, probably gets at my above point about keeping a Christocentric identity, but here I'm talking specifically about style. An evangelical style is not just about cool-factor (although, tragically, this has been a major thrust in its historical formation). At its best, it's about a high value for relational and emotional connectivity. It doesn't have to be cool, it just has to connect and thus meet people where they are, even at an emotional level. Why should it be taboo for people to worship God with music they hear on the radio? There's a reason we listen to the music we listen to. And it doesn't have to be shallow. The assumption I myself have been guilty of holding, at certain stages of my spiritual journey, is that so-called contemporary worship music and evangelical style are inherently shallow. But I think that there is deep theological value to, for example, some of the music that's been written by folks like David Crowder and Hillsong United... regardless, however, perhaps even shallow worship is better than deep worship if one is accessible to people and the other is not (I'm not sure if I totally agree with myself on that one... think about it).

Evangelical style is also simple (which is different than shallow). In our cluttered culture of more, more, more; simplicity can be therapeutic. Of course, this simplicity is sometimes born out of consumerism and we must be sensitive to that, but it doesn't negate the fact that a worship service doesn't need look like it did in the 19th century in order for it to be authentic or theologically legitimate. I'm talking about a casual and contemporary environment for worship--opening up the possibility for people to relate with one another and with God in a way that is welcoming, comfortable, and even inspiring. I realize that, for many, traditional liturgical services are quite connectional and quite comfortable... but for many, they're not. Though accommodation has it's draw-backs, why can't different people experience God in different ways?

When I'm talking about "evangelical," I'm also talking about an evangelistic and missional motivation. Evangelical churches are often almost totally constructed around the idea of sharing the gospel outside the walls of the church and being active in seeking out and making disciples. They have training and resources available to teach people how to share their faith. While this is often connected to a narrow view of evangelism--to getting people out of hell and into heaven--I don't see why a progressive church with a more holistic understanding can't have a similar motivation. The lines between progressive and evangelical are more blurry in this distinction because, in fact, many progressive churches are all about being active in the community and sharing the gospel, but research has shown that liberal main-line protestants have a harder time articulating what the gospel is all about--namely Jesus--than their conservative evangelical counterparts. Why shouldn't a progressive church feel liberated to speak boldly, specifically, and articulately about Jesus Christ and the gospel which bears his name? This bold, clear, articulation--this kind of evangelistic motivation--can and should exist in the context of progressive Christianity.

What I mean by evangelical is both stylistic and missiological. Many churches are evangelical, but are any of those churches progressive?

I don't know if I'll ever really be able to feel completely at home in a church which doesn't affirm the call of God on the lives of gay people, or fight for the rights of the marginalized, or love the poor, or leave room for theological uncertainty and doubt, or speak clearly about God's commitment toward creation and the universal scope of restoration. Likewise, however, I don't think I'll feel totally at home until I'm in a church which worships expressively, freely, and emotionally--yes, even "contemorarily"--a church which finds its identity and mission specifically within Jesus Christ and is not afraid or hesitant to proclaim that identity with clarity.

It actually seems to me that progressive theology should go nicely with contemporary style. And it seems like it would make sense for "traditional" theology (i.e. conservative theology) to go with traditional style. Why on earth does it seem that the opposite is true?!

Where is the truly progressive-evangelical church?

Perhaps those churches are out there... or perhaps they need to start springing up--not to imply that any other styles, forms of worship, or theological traditions are necessarily inferior... but I'm sure that if I'm on the lookout for a progressive-evangelical church, there are many others in the same hunt.
Posted by wellis68 at 9/20/2012 11:35:00 PM