"The Incarnation And The Church's Witness" by Darrell L. Guder 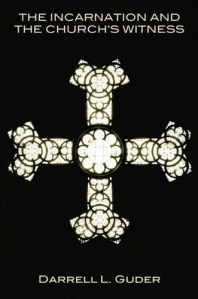 This semester (which has only just begun) I'm fascinated with my class on Missional Theology with Dr. Darrell Guder, so fascinated that I decided to do a little extra reading on the subject. In our class we're reading David Bosh's book Transforming Mission but when I saw that my professor had written a short book on the same subject, I couldn't resist. Yesterday I started reading The Incarnation And The Church's Mission by Dr. Guder and today I finished it.

It's a fascinating summary of the role of the incarnation in the practice of missional theological reflection. The doctrine of the incarnation, as the theological articulation of God becoming a human being in Jesus Christ, becomes the ground upon which we formulate and implement the mission of the Church. "Although the word is not found in the Bible, it is based on John 1:14: 'And the Word became flesh and lived among us'" (p.2). For Guder, this is an essentially missional act. It is God taking "the initiative in the healing of a broken and sinful creation" (p.2). By converting the noun, incarnation, into an adjective, incarnational (which, by the way, is not original the Guder at all), we are making a serious suggestion about the ways in which the Church is called to exist in the world. Guder's theology grounds that existence squarely within the ways in which Jesus existed in the world.  Jesus becomes for us a model, or perhaps even something more than that, of the why and how of mission. As Jesus was sent, so we are sent--we are sent out to witness to and embody the distinct and once-and-for-all incarnation in Jesus Christ. When the Church's mission is framed in such a way, when it is framed in Jesus, there emerges a great coherence between the message we preach and the ways in which we preach it. Our method is made subject to the object of our proclamation. If we ask how we are to be in the world, how we are to make known the good news of Jesus Christ, we need only look to Jesus Christ. We are to be in the world in the same way in which Jesus was in the world; holistically taking up the same concerns as those of Jesus.


"Jesus, who was the Word become flesh, gives us his Spirit so that we might be made into a people whose life together is a constant witness to him. To be about incarnational witness is to be obedient to the apostolic injunction: 'Lead a life [together--the imperative is plural!] worthy of the calling to which you have been called' (Eph. 4:1)" (p.59-60).

It's a good and quick read but, despite its brevity, it's a great contribution to the ongoing conversation about the mission God has for the Church.
Posted by wellis68 at 9/13/2012 07:35:00 PM